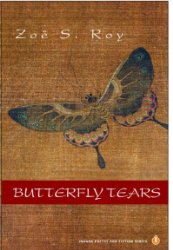 First sentence: "Friday night, after tucking her five-year-old daughter in bed, Sunni tried to relax on the couch, looking for something easy to watch on television."


Publisher's Summary: "Butterfly Tears is a collection of short fiction that depicts the experiences of Chinese immigrant women facing the challenges of life in a new country. The stories are set in different parts of China, Canada, and the United States and examine Chinese women’s cross-cultural experiences in North America as well as women’s issues and political discrimination in China. The stories, or parts of stories, set in China give the reader interesting glimpses into events such as the Cultural Revolution and Mao’s death. In the title story, an ancient Chinese legend about two lovers and memories of a violinist who commits suicide during the Cultural Revolution haunt a young woman who fears her husband is having an affair. Leaving her abusive husband, a woman and her young son in A Beaten Mandarin Duck move to New Brunswick where they form a new family with a visiting professor from China. Twin Rivers tells the story of a female engineer who ends up in jail as a result of her love affair with a married man. Feminism and changing male/female relationships form another important theme that runs through many of the stories."

Reason for Reading: I enjoyed the author's novel The Long March Home.

A collection of 15 short stories which centre on the female experience of the Chinese woman, both during the Cultural Revolution in China and as the immigrant in Canada or the US.  Most of the stories flip between modern day and the past bringing a resolution to some conflict that has long haunted the woman.  Roy's writing is a joy to read.  Her sentences flow with beautiful word choices, descriptive yet not flowery.  Each story was a pleasure for me to read, even when I did not actually enjoy the theme of the story.  Most of the stories I appreciated but there were a few whoppers that I just plain did not like or simply baffled me.  This would be where Roy's feminist ideology came into play, something that eludes me to no end.  However while those were stories I did not enjoy or "get" I still give props to the author for her delicious writing style.  I look forward to Ms. Roy's next offering with delight.

1. Butterfly Tears - A Canadian Chinese woman suspects her husband of cheating on her. This leads her to both remembering her childhood in China and to incurring symbolic dreams along with a tale from ancient China. I loved the writing and story but it ended too abruptly and I felt let down by the blase conclusion that held no respect for marriage. 4/5

2. Wild Onions - A 12yo girl moves to the dormitory during the Cultural Revolution and through her eyes we experience the absurdity of "school" in 1960s China. We glimpse the indoctrination and the psychological effects it has on the girl as her confusion grows between her loyalty to her country or her family.  I always find reading about the Red Guards quite terrifying and this captured all those feelings plus had a modern day resolution that was satisfying. 5/5

3. Yearning - The story of a young woman's escape from Maoist China to Hong Kong and her yearning for freedom as she dreams of going to America.  Love the insight into her mind as she leaves behind a mother, lover and new-found friend in free Hong Kong.  5/5

4. Frog Fishing - It is the day of Chairman Mao's death and two teachers are accused of verbally attacking Party leaders by another teacher.  I really enjoyed this story for its pure storytelling and the look at how ready the people were for the changes that came with Mao's death. 5/5

5. A Woman of China - A more modern (1980s) story of a Chinese woman contemplating her life and status.  Very feminist and I do not like or agree with this ideology at all.  Both the husband and the wife seemed to be caricatures and did not ring true as real people.  3/5

6. Ten Yuan - a male factory worker in 1970s China tells about how his penchant for storytelling got him in trouble but ultimately how it changed his life for the better.  This is simply a beautifully told story! Also gives insight into the workings of a factory in a communist environment. 5/5

7. Balloons - A sad story that represents how Chinese people now (from the 90s) are still just being reunited (or finding out what happened) with separated family during the Cultural Revolution. 4/5

8. Twin Rivers - This story was just awful.  I couldn't stand it.  An adulteress finds herself with no man when he breaks up with her because his wife and son are moving to Canada.  She knew he was married from day one.  After a year long affair she can't handle this, stalks and harasses him, ends up in jail and attempts suicide.  Of course she (and the narrator) blames the man, her upbringing (in Communist China) and then the Western justice system rather than accepting any responsibility for herself.  I suppose this is feminist literature. 2/5

9. Herbs - A Chinese woman is sent to the US to learn better English and stay with family friends by her abusive husband.  However, upon arrival, she turns the other way and disappears into Western society creating a new life for herself.  I enjoyed the writing as I have with all these stories and also enjoyed the woman's discoveries of the joys that come with living in the "free" world.  However, her harbouring of incestuous feelings and the glee with which the reader is told 26 states allow marriage between cousins put a damper on any genuine feelings of "likeness" I had for the woman. 4/5

10. A Mandarin Duck - This theme once again!  This time an abused immigrant woman has left and divorced her physically abusive husband for the sake of her son.  She learns to live an independent life but her problem is that she's never learnt English very well, nor had the time to really do so.  She longs for China, meets a Chinese man visiting for research purposes on 6 month terms.  They start an affair, she is aware of his wife and daughter back home from the start but somehow thinks he'll give it all up for her.  When he leaves and goes back home, her conclusion is she's once again been abused by another man!?, but this spurs her on to finally make changes in her life for her own sake.  Well-written and enjoyable until the woman starts blaming the man for her own immoral conduct.  4/5

11. Noodles - A Chinese woman has recently joined her husband in Canada and she sets about learning English to make sure she can succeed in her new country.  As time goes by she and her husband learn that they share different ideas and values when it comes to having children and raising them.  3/5

12. Ginkgo - As usual I thoroughly enjoy the author's engaging writing style and her wonderful turns of phrase.  However, like some previous other stories, I just don't relate to the emotions of the characters in some of these stories, this included.  Just before a young woman, Brook, moves the US for an arranged marriage she meets a young man and they have a profound attraction to each other (love at first sight?). Eight years later they run into each other in a restaurant in the US with their respective husband and girlfriend and both experience a yearning for each other.  A bittersweet ending occurs.  I enjoyed the story, but didn't really feel for the characters.  The man treated his girlfriend like dirt, wouldn't marry her and then really treated her badly when he started fantasizing about Brook.  Brook is obviously having feelings that a married woman (with children) has no right to be entertaining. Perhaps the ending is a saving grace for her. 4/5

13. Fortune-Telling - I honestly don't know what to think of this story, two Chinese immigrant woman go to see a fortune teller, one believes in the experience while the other is a skeptic.  The woman who believes has her past brought up and her fear/hatred for men is brought to light, starting with her father.  The possibility of a romantic relationship between the women is left hanging in the air, though it is only left to the imagination of the reader; it could easily be a close female friendship as well.  I took this view but was still unappreciative of the man bashing.  (3/5

14. Life Insurance - This is such a short story and a really touching one too.  It's the story of a young Chinese woman living with her sister trying to gain her Independence by working odd jobs until she can speak English better.  But then it turns into a love story and being true to one's self.  Just a lovely little story. 5/5

15. Jing and the Caterpillar - Another very short story but perhaps my 2nd least favourite.  It switches back and forth from China to Canada telling episodes of people becoming sick because of the spraying of pesticides.  We are told all about the little caterpillar that is eating up and killing the trees and the various pesticides used through the years, each supposedly safer to humans than the one before.  The message is very clear, don't use pesticides at all.  There is even a little poem at the end about how caterpillars and humans are both living things.  My question is:  what about the trees?  They are living things too, no? The scene at the end with the caterpillar nets all over the trees was not beautiful to me.  Weird story.  3/5
Labels: 2009 Canadian author China short stories