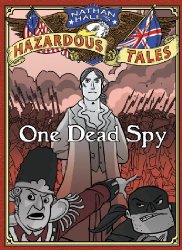 
First sentence: "Hey! Get out of here, you dumb bird!  This is the hanging tree!"

Publisher's Summary: Nathan Hale, the author’s historical namesake, was America’s first spy, a Revolutionary War hero who famously said “I only regret that I have but one life to lose for my country” before being hanged by the British. In the Nathan Hale’s Hazardous Tales series, author Nathan Hale channels his namesake to present history’s roughest, toughest, and craziest stories in the graphic novel format.

One Dead Spy tackles the story of Hale himself, who was an officer and spy for the American rebels during the Revolutionary War. Author Hale highlights the unusual, gruesome, and just plain unbelievable truth of historical Nathan Hale—from his early unlucky days at Yale to his later unlucky days as an officer—and America during the Revolutionary War."

Reason for Reading:  I enjoy this type of children's historical graphic novel/biography and have appreciated Hale's artwork in other books.

This was so much more than I had expected it to be.  It simply was brilliant and an excellent read all round.  Nathan Hale (writer) has done for American History what Rick Geary has done for 19th century crime.  The two series are admirably similar in their focus and format bringing more information to the table on exciting events from the past through a totally enticing graphical format.  Hale sets up his series by telling the story of the historical Nathan Hale as he is about to be hung, the man, his executioner and a British Guard are on the block when something happens which allows Hale to tell the story of his past which includes the story of the American Revolution up to this point.  Told with extreme detail, I was quite amazed at how much I was actually interested in (and understood) the military strategy, battle details and reasonings behind various maneuvers.  This part of war I'm not usually very interested in but Hale (author) has made it exciting and funny.  Along with this detail, there is also the personal stories of the people involved in the war as they related to Hale (the spy).  We learn about Henry Knox, George Washington, Thomas Knowlton, Benjamin Tallmadge and many others.  I especially appreciated how Hale (the author) brought history alive with his humour; he sometimes goes beyond the scope of the book and makes comments about our world to the reader, he pokes great fun at these historical characters, making fun of strange names and strange circumstances.  The executioner is my favourite character as he is the one he is not quite so "book-smart" and asks the questions and makes the comments the reader probably would.

Following the excellent tale about Nathan Hale (officer & spy) and the American Revolution up until that point is a small epilogue in which Nathan's hanging is delayed so he may tell some more tales of American History, since he now has the power of knowing both the past and the future.  Then the book is still not over.  Next up comes a quick biographical info on all the major players in the book, leading up to what actually happened to them in the end.  Then the author does a funny little segment where he thanks those who helped make the book including the researchers, who just happen to be babies!  This is quite hilarious as the babies explain how one researches for such a project as a book like this.  Then there is a little Q&A section where it is explained where artistic licence has been taken with actual historical events and where the author has supposed based on less than forthcoming historical data.  And if you didn't think that was enough the book finally ends with a mini-comic about Crispus Attucks.  It tells of his life through death but concentrates on the Boston Massacre (discussed already in the main story).

A veritable goldmine of information.  A joy to read, not only because it is exciting but also because it is hilariously funny.  Highly recommended and I can't wait to get my hands on the 2nd book, Big Bad Ironclad.