195. Shadow of the Titanic by Andrew Wilson 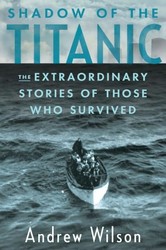 Shadow of the Titanic: The Extraordinary Stories of Those Who Survivedby Andrew Wilson (US) - (Canada) - (Kindle)

First sentence: "The sound of the screaming was the worst thing, they said."

Publisher's Summary: "IN the early morning hours of April 15, 1912, the icy waters of the North Atlantic reverberated with the desperate screams of more than 1,500 men, women, and children—passengers of the once majestic liner Titanic. Then, as the ship sank to the ocean floor and the passengers slowly died from hypothermia, an even more awful silence settled over the sea. The sights and sounds of that night would haunt each of the vessel’s 705 survivors for the rest of their days.


Although we think we know the story of Titanic—the famously luxurious and supposedly unsinkable ship that struck an iceberg on its maiden voyage from Britain to America—very little has been written about what happened to the survivors after the tragedy. How did they cope in the aftermath of this horrific event? How did they come to remember that night, a disaster that has been likened to the destruction of a small town?


Drawing on a wealth of previously unpublished letters, memoirs, and diaries as well as interviews with survivors’ family members, award-winning journalist and author Andrew Wilson reveals how some used their experience to propel themselves on to fame, while others were so racked with guilt they spent the rest of their lives under the Titanic’s shadow. Some reputations were destroyed, and some survivors were so psychologically damaged that they took their own lives in the years that followed.


Andrew Wilson brings to life the colorful voices of many of those who lived to tell the tale, from famous survivors like Madeleine Astor (who became a bride, a widow, an heiress, and a mother all within a year), Lady Duff Gordon, and White Star Line chairman J. Bruce Ismay, to lesser known second- and third-class passengers such as the Navratil brothers—who were traveling under assumed names because they were being abducted by their father.


Today, one hundred years after that fateful voyage, Shadow of the Titanic adds an important new dimension to our understanding of this enduringly fascinating story."

Reason for Reading: I belong the Titanic Reading Challenge and have had a life long interest in the Titanic.

An exciting non-fiction read that concentrates on the people aboard the Titanic who survived and what became of them. Starting with a chapter on the sinking itself and then devoting another chapter to the rescue aboard the Carpathia the book then devotes a chapter each to either one lone survivor or those related by a certain theme such as a later chapter in the book called "The Dark Side of Survival" which recounts the lives of several survivors who ended up committing suicide. All the famous survivors are given their spot in this book such as the Duff Gordons, concentrating on Lady, Madeliene Astor, Bruce Ismay, Jack Thayer, Dorothy Gibson, Edith Rosenbaum, etc. Also some more obscure stories of people who weren't famous to begin with or didn't become so until afterwards are told and these little tidbits are the most interesting to me. The author has had access to a plethora of documents and includes many quotes from unpublished memoirs of survivors, which really bring the history of these people alive. Wilson also keeps heavily in mind the Edwardian society and ideology of the time and how the Titanic was a symbol of this, and its sinking was the beginning of the end of these idealized "happy" days and strict class systems. A riveting read that keeps one glued to the pages even when one knows the Titanic story quite well to begin with.
Labels: 2012 history non-fiction titanic