190. The Hunchback of Notre Dame by Tim Conrad 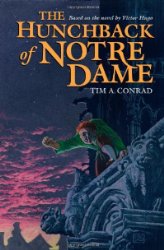 The Hunchback of Notre Dame by Tim Conrad (US) - (Canada)

First sentence: "On January 6, 1482, the city of Paris reverberated with the tumultuous clanging of bells."

Publisher's Summary: "Tim Conrad adapts Victor Hugo's classic romance about a beautiful gypsy girl, Esmeralda, who is framed for murder by the infatuated Archdeacon of Notre Dame. Only Quasimodo, the hideously deformed bell-ringer of the cathedral, can save her.


Religious extremism, class distinction, fate, destiny, and sexual dynamics are played out in a rousing yarn of intrigue within the walls of the Parisian cathedral of Notre Dame."


Acquired:  Received an egalley from the publisher through Netgalley.

Reason for Reading: I enjoy reading graphic adaptations of the classics.

The Hunchback of Notre Dame is one classic which I love not because I've read the book but because of the movie.  It was regular fare for me to watch the Charles Laughton version whenever it appeared on TV when I was a child growing up.  I've never read the book and somehow don't think I will as I have not been lucky with French Literature but I have my own sense of the story from the movie and the adaptations I've read over the years.

This edition very much plays up the sexual angle of the story, making us see the sexual history and motives of everyone involved from priest to gypsy girl and King's Guard to the hunchback himself.  The plot has been well captured but brought down to a seedy level until no one seems to have the morals worthy to continue with their own life.  I've always had compassion for the hunchback in other versions, this version makes him as morally corrupt as every one else in the end.  Perhaps he reclaims some sort of bittersweet humanity in the way of his death, but again he looses that because of his choice to die.  Perhaps this is more true to the original book than I have been exposed to before, if so I appreciate that but personal preference sends me to preferring my Charles Laughton idealized vision.

I can't say the illustration did much for me.  The facial features were large and brutish and even Esmerelda was unatrractive to look at.  No, I must say this was not a very satisfying retelling for me.