187. Captain Awesome To the Rescue by Stan Kirby 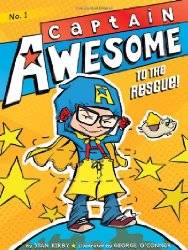 When the McGillicudy family relocates to a new town called Sunnyview, Eugene starts a new school, finds a best friend, and even finds time to defend his toys from his two-year-old little sister, Molly! Luckily for Sunnyview, Captain Awesome is there to protect the town (and the universe) from a hilarious cast of comical “bad guys.”

With easy-to-read language and illustrations on almost every page, the Captain Awesome chapter books are perfect for beginning readers."

A beginning chapter book for five to eight year olds and yet not written down to children that it keeps the attention of older reluctant or struggling readers.  My autistic son is 12 and quite enjoyed himself with Captain Awesome & Turbo's first adventure.  I also was very pleased.  Nice large text, pictures on every 2-page spread, often more than one, makes use of all typical superhero devices and connects with the child as they imagine someone like themselves becoming a superhero and saving their family, town, school, etc.  The language is simple at this reading level and yet it manages to contain humour, a fun plot and typical kidspeak, "dude".  We have some others in the series and ds is looking forward to the further adventures of.  Great start to a welcome new series especially appealing to boys.
Labels: 2012 early chapter books humour superheroes