186. The Dispatcher by Ryan David Jahn 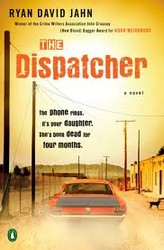 The Dispatcher by Ryan David Jahn (US) - (Canada) - (Kindle)

First sentence: "Ian Hunt is less than an hour from the end of his shift when he gets the call from his dead daughter."

Publisher's Summary: From the author of the award-winning debut crime novel Good Neighbors - a white-knuckle thriller about the lengths a man will go to for his daughter.

The phone rings. It's your daughter. She's been dead for four months.

So begins East Texas police dispatcher Ian Hunt's fight to get his daughter back. The call is cut off by the man who snatched her from her bedroom seven years ago, and a basic description of the kidnapper is all Ian has to go on. What follows is a bullet-strewn cross-country chase from Texas to California along Interstate 10- a wild ride in a 1965 Mustang that passes through the outlaw territory of No Country for Old Men and is shot through with moments of macabre violence that call to mind the novels of Thomas Harris."

Reason for Reading:  I love a good thriller and the publisher's summary pulled me into giving this one a go.

When I sat down to start reading this book which has closer to 400 pages than 300, it was early in the morning and little did I know I would be in the same spot that evening tapping to the final pages of this addictive read.  My back was sore, my thumb ached (from tapping pages on my Kindle Touch) but I had just been on the most thrilling ride of my recent reading life.  I've read some pretty good books this year; 186 and counting so far with many 4 and 5 star rated reads but it has been quite some time since I read a thriller in one day and felt like I was on the edge of my seat the whole way through!

The story only takes place over several days, four or five I'm guessing.  Again this is a mystery where the reader knows the culprit and the thrill is first in watching the police discover who he is and then once he becomes known a wild cross country chase takes place which keeps the pulse rate high and the chest tight. The narrative switches points of view between the father, the daughter and the kidnapper; each starting at different points in time to get the background story told but they do quickly join up so that the narratives flow together in the present.  I love this approach when we know who the culprit/killer is, as getting inside his head/mindset is very intriguing.  Jahn has written one of those books that you pick up and just cannot put down until you finish.  The pace is fast, the writing sparse, dialogue driven, the plot includes both violence and unexpected twists, no one is safe and the ending feels like it could only have been that way.  This would make a good movie!  And I am going to read Jahn's first book "Good Neighbours" as soon as I can, which has been compared to Hitchcock for it's suspense!
Labels: 2011 crime thriller