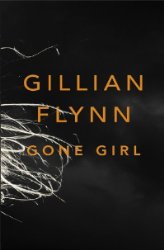 First sentence: "When I think of my wife, I always think of her head."

Publisher's Summary: "Marriage can be a real killer.On a warm summer morning in North Carthage, Missouri, it is Nick and Amy Dunne’s fifth wedding anniversary. Presents are being wrapped and reservations are being made when Nick’s clever and beautiful wife disappears from their rented McMansion on the Mississippi River. Husband-of-the-Year Nick isn’t doing himself any favors with cringe-worthy daydreams about the slope and shape of his wife’s head, but passages from Amy's diary reveal the alpha-girl perfectionist could have put anyone dangerously on edge. Under mounting pressure from the police and the media—as well as Amy’s fiercely doting parents—the town golden boy parades an endless series of lies, deceits, and inappropriate behavior. Nick is oddly evasive, and he’s definitely bitter—but is he really a killer? As the cops close in, every couple in town is soon wondering how well they know the one that they love. With his twin sister, Margo, at his side, Nick stands by his innocence. Trouble is, if Nick didn’t do it, where is that beautiful wife? And what was in that silvery gift box hidden in the back of her bedroom closet?"


Acquired: Received an egalley from the publisher at Netgalley.

Reason for Reading:  I loved Flynn's Dark Places and was excited to read another book by her.

I was excited to read this as I had enjoyed Dark Places very much and have seen the reviews for this popping up all over the place; while not reading them, I was taking note of the 4 & 5 star ratings.  I have to say I was a bit let down from my expectations.  As I started reading Part One,  I just really didn't find myself all that intrigued as I couldn't ge over how the events mimicked the Scott Peterson case item by item so of course I knew that meant the husband wasn't the killer because what kind of book would that be? So no suspense as everything was expected as it unraveled in Part One and I had thought of a few ideas as to what may be going on and was not shocked at the twist that came with Part Two.  Basically, the whole plot of the thriller didn't *thrill* me.  Now, I won't say I didn't enjoy it as I did once Part Two was under way, but I was underwhelmed.

Secondly, the two main characters, both the husband and the wife, I found completely repulsive.  I didn't like either of them as people and was unsatisfied with the ending.  I connected with the sister, Go, but it just isn't that compelling to read a crime story about people you don't care for.  So overall, while the plot had twists and kept me reading to find out how it all turned out in the end, I found this book to just be ok.