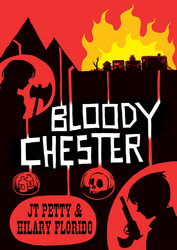 First sentence: "Pancakes.  And a whisky."


This isn’t John Wayne’s heroic old west.
This is the real deal: a filthy, disease-ridden frontier populated by losers, lunatics, and murderers. And when you’re a skinny teenager with no family and a name like Chester Kates, your options are limited. It’s stand up and fight or roll over and die, so Chester, aka “Lady Kate,” is set to fight until it kills him.
It isn’t much of a life, but it’s at least straightforward.
Until things go all cockeyed when Chester is hired to ride his horse (also named Chester) to a ghost town and burn it to the ground. Except the ghost town doesn’t just boast a tidy collection of mangled corpses: it also has three living inhabitants . . . who won’t be budged. But Chester’s been hired for a job, and he’ll be damned if he doesn’t burn the town to the last cinder.
Thing is, he may just be damned if he does.
This horror-Western-mystery graphic novel will send a thrill—and a chill—down your spine. Funny, fascinating, and downright horrible, this is a book that keeps you turning the pages.

Reason for Reading: I always read anything new from this publisher that catches my eye!

This is a violent, brutal book and it starts off that way with a saloon fist fight.  This is particularly hard to read/look at as the main character, Chester, is only a boy; no age is given but due to how he is drawn and the fact that he *just* needs to shave, though not everyday, he looks to be about 15 to this reader. He's scrawny and on the short side. This makes it hard to watch him being beaten by a man of much more advanced years.  Chester's had a tough life like this and has the scars to prove it.

This is a good story, but a hard one to like.  Not really a horror in my book as there is no supernatural element, though we are to consider one at times, but when the truth comes out in the end it is all the more horrifying because of the much to true brutality of man against man.  This is a story of revenge, no one person comes out a winner, but it is bittersweet in the end and as one "gets" the message, it is powerful.  Yet still a tough story to read, due to theme, graphic detailed images and language but if you like Westerns and contemplating the inhumanity of some humans; it is a worthy read.
Labels: 2012 graphic novel horror mystery western