180. Under the Bright Lights by Daniel Woodrell 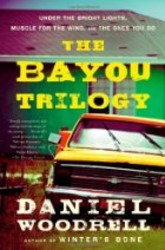 Under the Bright Lights by Daniel Woodrell (US) - (Canada) - (Kindle)
Bayou Trilogy, #1*
*my copy was contaned in this current omnibus edition.


First sentence: "Jewell Cobb had long been a legendary killer in his midnight reveries and now he'd come to the big town to prove that his upright version knew the same techniques and was just as cold."

Publisher's Summary:  When a city councilman is gunned down, Rene Shade refuses to write off his death as a burglary-homicide as he is ordered to do. Now, Shade's quest for the truth leads him on a chilling chase through a treacherous swamp of leeches and cottonmouths--while dodging his own unresolved past.

Reason for Reading: I am in the process of reading all of the author's works.  This is his first book.

Being Woodrell's first book, this is very different from what he has become known for, that is his Ozarks fiction of poverty ridden families.  "Under the Bright Lights" is the first in a trilogy of hard-boiled Philip Marlow-esque, deep south, southern fiction, police procedural crime stories.  Quite a mix of genres there that is a little clumsy for a first time writer, but pulls together nicely by the middle of the book and shows where Woodrell is going to go with his future books.  Set in fictional Saint Bruno, the state is never mentioned, but the geographical clues lead me to believe we're looking at Louisiana.

Rene Shade is the main character, a police Detective, once former boxer, who made it to the championship, but lost.  Small rather rural town-city where everyone knows everyone Shade can't live down his boxer reputation which has its perks as wells as cons, being an upholder of the law now.  This is a mystery where we are first introduced to the killer, his kill and his flight and we then follow the police as they search their way through the clues and intuitions to discover that killer.  But as often happens, one murder leads to another and Shade has his hands full.  We are sent into the underbelly where we find semi-crooked politicians, porn kings, gangs (the new mafia-type controllers of the city) territorial gang fights and those who get involved in this seedy world.  A violet book, sad and brutal.  It did take me some time to get into it but once I did I was hooked.  The main theme revolves around the French gang versus the Black gang with Shade and the police caught in the middle trying to catch the culprit behind all the killings, not necessarily just the trigger man.

A good book if you enjoy noir mysteries or Southern fiction mystery.  Word to the sensitive though, the book does contain a lot of racist language (the n-word and equally offensive descriptors for other ethnic groups) which while unpleasant is totally in sync with the times and these particular characters.   I've enjoyed the two Ozarks books  read so far, but this was interesting and shows the author's raw talent.  Will be interested to see how he develops as an author over the course of the next two books in  the trilogy.
Labels: 1986 crime noir southern fiction