179. The King's Taster by Kenneth Oppel 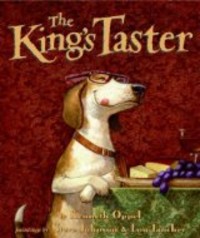 First sentence: "My name's Max, and I eat like a king."

Publisher's Summary:  Max is the cook’s dog. And because he is also the king’s taster, Max gets to feast on wild boar! cheese pies! rose pudding! No wonder Max loves his job. Who wouldn’t want to dine on these delicious dishes? The new king, that’s who. Max and the cook must find a new recipe—and fast. Otherwise, if the new king has his way, they’ll be losing more than just their jobs!

Acquired: Borrowed from my local library.

Reason for Reading:  I am reading all of the author's books.

This is the first time I haven't been thrilled with an Oppel book.  I have to say this one did nothing for me.  The boy king behaves like a spoiled brat throwing all food given to him against the wall, enabling the dog to enjoy the hearty left-overs.  It isn't until the end that he is found out to be a secret candy eater and has to be threatened with "telling his mother" does he become frightened enough to behave.  Said mother is never present in the book.  The boy king then tries the food, and night after night, low and behold, he discovers he likes it.  Not exactly any good role models to be found here and the message is lost when the boy has to be threatened with a parent.  The humour is lost on me.  Of course, the intended audience will enjoy the story if it is read to them without any interruption about the bad behaviour being displayed, if you want to celebrate such behaviour without consequences.

On a positive note,  the husband and wife team who illustrated this book did a magnificent job.  I just love the mixed-media collage paintings.  They've included fabrics and text from old recipe cards, candy wrappers and I believe they've used inks (though it may be water colours).  Just fantastic illustrations!
Labels: 2009 animal fantasy children humour picture books