177. The House at Sea's End by Elly Griffiths 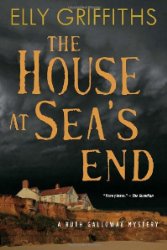 
First sentence:"Two people, a man and a women,are walking along a hospital corridor."

Publisher's Summary: In the third novel in the Ruth Galloway series, shoreline erosion at the village of Broughton Sea's End has revealed the skeletons of six men, their arms bound. From the mineral content of their bones, forensic archaeologist Ruth Galloway can tell that they were all Germans. Most likely, DCI Harry Nelson reckons, they were killed by the local Home Guard when they tried to land during the Second World War. This is just the first complication in a story brimming with surprise twists, not all of them stemming from these murders. Ruth is a new mum of a daughter she adores but whose existence is raising eyebrows and is testing Ruth's assumption that she can be a mum, a professional archaeologist, a teacher, and an adjunct to a murder investigation all at the same time.


Acquired: Received a review copy from Random House Canada.
.
Reason for Reading: Next in the series.

I enjoy this series but have to say this third book was not up to par with the first two books.  The book's focus was on a case from the past which wasn't entirely all that exciting.  The police investigation leads to witnesses and people involved turning up dead and the police believe they have a killer on their hands who doesn't want the truth of the past to become known.  This case is a little more interesting but the two are inseparably intertwined.

While the murder investigations are going on "Sea's End" mainly seems to concern itself with the private lives of the two main characters Ruth and Harry, plus those of some minor characters within the police department as well.  I enjoy mystery series that contain a continuous story throughout with the main characters but this time the personal relationships overshadowed the mystery theme and I didn't really come upon any surprise twists.  One thing I did appreciate was the further development of Cathbad's character who has been proven to much more human in this entry, rather than the eccentric buffoon he's been up to this point.

Another point I was puzzled with was the over emphasis on Catholicism.  Almost every character either was or had something to say about being a lapsed Catholic, anti-Catholic, or just shamed of their Catholicism.  Of course, Harry's struggle with his Catholic upbringing and faith has been discussed in the series before.  But this was so prevalent, with so many characters, I actually thought it was going to be a plot point in the solution of the case, but ended up realizing it was just the author's personal bias showing through.  A decent enough mystery, it held my attention and I read it quickly but not as good as the first two Galloway mysteries.  Hopefully the latest one gets back on track.
Labels: 2011 mystery