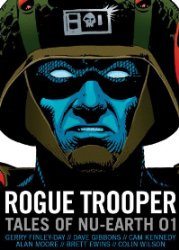 Publisher's Summary: "Nu-Earth, a planet ravaged by war, its atmosphere poisoned by chemical weapons. In this battle-scarred landscape, the Norts and the Southers fight where only the Genetic Infantrymen can survive unaided. Rogue is one such soldier and these are his tales...


When three members of his unit are shot on a mission, Rogue pulls the bio-chips from their bodies and inserts them into his gun, backpack and helmet. Thus equipped Rogue, and his wise-talking buddies, make the most fearsome unit on Nu-Earth."

Reason for Reading: I've enjoyed everything I've read from 2000AD so far and this intrigued me as something quite different from what I usually read, yet still in tune with my tastes.

It's a bit daunting going into a 400pg collection of a comic one has never read before but Rogue Trooper had me hooked from the start.  The stories were originally published individually in the British comic book/magazine 2000AD.  Some stories are a couple of pages long, others several and eventually the stories continue in parts that carry on from 3 to 19 issues.  These stories are from the early 80s and are strictly science fiction (no paranormal or spooky nonsense).  There is a war being fought on this planet which the ins and outs of are explained over the course of several stories.  Rogue Trooper is a genetically engineered infantryman who carries upon him the personalities of three of his fallen buddies on bio chips inhabiting his helmet, supply bag, and gun.  Together they are the last of the GI's as the rest of them were annihilated in a massacre.  These men have decided to go rogue until they have discovered what happened at that infamous battle that slaughtered his fellow servicemen.

This story is all gradually released slowly over the course of the individual stories and it gets deeper and more involved as the book goes along.  Some stories are minor sidetrack adventures, others are integral to the overall arching plot of Rogue's ultimate mission.  He does find out what happened that day, then searches for the person responsible, finds that person and then sets out to find justice for that person.  Many, many other events and sidetracks, some having to do with the war, some more personal and some just simply lighthearted occur along the way.  The book is definitely action oriented and plot focused but Rogue's character is explored and developed especially in the second half of the volume, as to a degree are the characters of the bio-chip buddies.  Many threads are left open, and storylines are left to continue by the end of this volume.  I found this a fun, entertaining read but certainly a product of the '80s.  As a side-note, the entire comic is written by Finley-Day except for the last two stories which come from Annual editions and are written by Alan Moore, so this is not recommended if you just are a Moore fan.  If you like 80s comics, science-fiction, war battles, space wars, and British humour this will be sure to please.  I'll be first in line, when I hear Vol. 02 is being published!
Labels: 1981 1982 1983 2012 graphic novel science fiction war