172. The Chemistry of Tears by Peter Carey 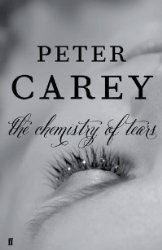 The Chemistry of Tears by Peter Carey (US) - (Canada)

First sentence: "Dead, and no one told me."

Publisher's Summary: An automaton, a secret love story, a man and a woman who can never meet, and the fate of the warming world are all brought to incandescent life in this haunting new novel from one of the most admired writers of our time.

When Catherine Gehrig, a museum conservator and clock expert, finds out that her very married lover of thirteen years has dropped dead, she has keep her grief a secret. But with no outlet other than vodka, her sorrow is close to driving the hyper-rational Catherine mad. The only person who knew of their affair--her boss--tries to distract and rescue her by giving her a project that demands all of her attention: the reconstruction of an elaborate nineteenth-century automaton. In the crates containing its bits and pieces, Catherine discovers a series of notebooks written by Henry Brandling, who, in 1854, commissioned the extraordinary, eerie mechanical creature in an attempt to bring joy to his consumptive little son. Henry's is a personal account of his adventures in the wilds of Germany, a diary that brings Catherine unexpected comfort, fellow feeling and wonder. But it is the automaton itself, in its beautiful, uncanny imitation of life, that links Henry's life to Catherine's, as both are confronted with the miracle and catastrophe of human invention, and the body's astonishing chemistry of love and feeling.

Reason for Reading: Peter Carey's True History of the Kelley Gang is one of my all time favourite books and I've always meant to read another by the author. With this latest book coming out, the time period and the automata piqued my interest enough to decide to give him another go at this time.

I'm not even going to try and analyze just what the hidden, under the surface meanings are in this story, there are plenty but it gives me a headache looking at this book that way.  I just want to read it and enjoy  a good story.  Read it I did but I only found a mediocre story.  We start off on the first page meeting the main character, an adulteress, with no redeeming qualities.  Her married lover has just died and she is totally wrapped up in herself.  She has no cares for his children, whom he loved dearly and we learn that she often was jealous of them.  She is quite younger than this man and her life seems to have existed for their relationship together, and her job as an horologist at a museum secondly.  That's all, no friends, no family.  Catherine, or Cat, as she is commonly called is given a project to restore to help her with her grief by the only person at the museum who knew about her affair.

The text alternates between Catherine in the present dealing with her grief, possessiveness and selfishness as she becomes somewhat obsessive over the automata that she and a young assistant, whom she dislikes and distrusts, are working on.  Cat is also reading through the ledgers/journals that came packed with the assemblage which gives us the other view.  Henry Blanding tells his story set in the 1850s of how he came to a strange little German town and had an even stranger man build his clockwork duck for him.  His journal is written to his young son whom he promised this prized possession in hopes that it would make him well, as he is a sickly boy, most likely consumptive.  Henry also is not a rather likable fellow.  His wife has refused relations with him, denied to care for their son, since their first child, a daughter died the same way.  She is loveless to them and Henry is pathetic in his attempts to be all and do all for this cold woman who brings in an artistic crowd to their house to have her portraits painted.  Henry is eventually persuaded to leave the house, his search to make the automata his pretence for leaving.  While unlike Catherine, Henry does slowly change throughout the book, for the most part he is a weak man, easily taken advantage of, of superior mind of course being an Englishman, and emotionally volatile.

There is more to say, but I shan't go on.  The basic plot of the two stories was entertaining to read, the writing naturally superb, and I had no problem getting though the book quickly; I'm sure its short length helped matters though.  But I had no connection to any of the characters, not liking them, nor caring what happened to them in the end.  Not everyone is sane in this story and it's up to the reader to decide who is or isn't sane.  Perhaps they are all off their rockers.  The ending does little to satisfy this reader.
Labels: 2012 historical fiction Victorian