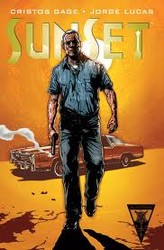 Publisher's Summary: Sometimes all you can do is go out with guns blazing! In the noir tradition of Chandler and Spillane comes Sunset, a two-fisted tale of revenge and redemption. On the surface, Nick Bellamy looks like any other veteran retiree left behind by a modern world. In reality, Nick is a former enforcer, who stole a fortune and years of freedom from his former mob boss. Now, in the twilight of his life, Nick will lose everything he cares about except two things: revenge... and the chance to die with his guns blazing! Writer Christos Gage (Avengers Academy, GI Joe: Cobra) and artist Jorge Lucas (The Darkness) promise to hit hard with Minotaur Press' first original graphic novel and make you forget all about your Prius and organic whole-grain trans-fat-free diet!

Acquired: Received an egalley from the publisher through Netgalley

Reason for Reading: I loved the total crime/mob/revenge theme.  I'm really getting into GN's that are far removed from the usual fantasy/sci-fi subgenre, not that I'm giving those up, just branching out!

This is fantastic! Definitely one of the best GN's I've read this year, if not *the* best. Dirty, gritty, old-fashioned noir, starring a  77yo man from that gangster world of the past but now drawn into the one of today.Nick Bellamy looks like a senior citizen but he also looks like he was a tough guy in his day, and less noticeably still is.  When his 30 years of living a quite, good life with the woman he loved are over after his former mob boss gets out from prison and hunts him down to make amends, Nick decides to either exact revenge or go down in the middle of the fight.   A dark, violent story showing mostly what gangsters were like thirty years ago compared to today.  Nick has the advantage.  The book also has humour, as Nick gets back out into the real modern world he is confronted with all the whiny, lazy, "pansy" behaviour of modern people and it makes him sick.  Hi reactions to modern devices, trends and behaviour put a smirk on your face and when he finds out what a "MILF" is, his reaction is priceless!  Nick's not a guy to like, a cold-blooded killer, a murderer for hire, a hitman who enjoys his job but he is surrounded by others who could probably be called worse than him until he finds the real love of a woman which makes him turn his back on it all, yet always prepared for the day when his past will come calling.  Even though Nick is an anti-hero, he has friends that truly care for him. Engrossing, riveting, a must read!
Labels: 2012 crime graphic novel noir