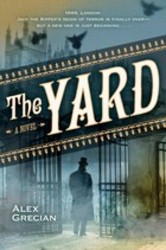 
First sentence: "Nobody noticed when Inspector Christian Little of Scotland Yard disappeared, and nobody was looking for him when he was found."

Publisher's Summary: Victorian London is a cesspool of crime, and Scotland Yard has only twelve detectives—known as “The Murder Squad”—to investigate countless murders every month. Created after the Metropolitan Police’s spectacular failure to capture Jack the Ripper, The Murder Squad suffers rampant public contempt. They have failed their citizens. But no one can anticipate the brutal murder of one of their own . . . one of the twelve . . .

When Walter Day, the squad’s newest hire, is assigned the case of the murdered detective, he finds a strange ally in the Yard’s first forensic pathologist, Dr. Bernard Kingsley. Together they track the killer, who clearly is not finished with The Murder Squad . . . but why?


Filled with fascinating period detail, and real historical figures, this spectacular debut in a new series showcases the depravity of late Victorian London, the advent of criminology, and introduces a stunning new cast of characters sure to appeal to fans of The Sherlockian and The Alienist.

Reason for Reading: I love Victorian mysteries, especially when they actually focus on early policing.

Superb! Splendid!  I am thrilled to hear this is the first in a proposed new series.  The Yard has everything I want in a Victorian crime: authenticity, atmosphere and a peek into the underbelly of Victorian life.  Though none are used as characters in the book, the book is peopled with real-life personages from the era to lend authenticity and one can tell much research has been done on the author's part as the book lives and breathes Victorian London, one can almost see the fog rising from the pages and smell the stench as a page is turned.  Grecian has devised a wonderfully wicked murder mystery that involves not only one but two serial killers and not only two crimes but a handful of others which keep the characters busy and the reader on his toes trying to piece things together.  This is one of those mysteries where we the reader are given access to the murderer from the beginning and the sport is in watching how the police solve the case.  Mind you, there are also a handful of other crimes going on, some related, some not, but all somehow coming together one way or another.  Incredibly genius really.  I so enjoy a clever mystery and this is one by far.

A major aspect of the novel is the introduction of forensic sciences.  This book focuses on fingerprints and how they were first discovered and put into practice in policework.  The general disdain for the practice except for a few forward thinking people and the amazing results as the "coroner" for the Yard applies them to the job.  We also are introduced to a great cast of characters, main and auxiliary, who hopefully will be following into the next book of the series.  Both of the main sleuths are green, but very clever.  Quite different from each other in circumstances and character, Detective Inspector Walter Day and Constable Nevil Hammersmith both share a sense a duty and justice.  I did find the first hundred pages slow reading, but that is the type of book this is, they were slow, but not boring in the least.  I was drawn in right from the captivating first sentence and while the first hundred pages slowly draws us into the era, the characters, the cases on hand, the rest of the book was a riveting, fast, hard-to-put-down mystery of London's underbelly, depravity and trauma.  Book two's focus is said to be on the introduction of the use of photography into policing and I'm looking forward to it with glee!
Labels: 2012 crime historical fiction mystery Victorian