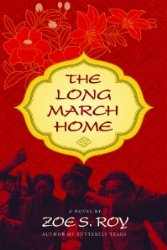 
First sentence: "I'm having a baby! Meihua Wei was hoping for a girl; she already had two sons."

Publisher's Summary: The Long March Home is a saga of three generations of women. Agnes, a young Canadian goes to hina as a missionary from the United Church of Canada and falls in love with a Chinese medical student. Growing anti-western sentiment forces her return to home to Nova Scotia, where she discovers she is pregnant. Meihua, their American-born daughter, travels to China in search of her father and winds up marrying a Chinese man, but the Cultural Revolution tears their lives apart. With both parents imprisoned, it falls to the family's illiterate maid, Yao, to shield their daughter, Yezi, and her brother, from family tragedy, poverty and political discrimination, negotiating their survival during the revolution that she barely understands. Only after her mother is released, does Yezi, learn about her foreign grandmother, Agnes, who lives in Boston and has lost contact with the family since Yezi's birth. Curious about her ancestry, Yezi joins her grandmother, Agnes, in the U.S. and learns about her life in China with the man her mother still longs to find.


Acquired: Received a review copy from the author.
.
Reason for Reading: I love books set in 20th century China and the Cultural Revolution is of particular interest to me.

First, I'd like to say I don't like the publisher's summary of this book.  The summary tells the story backwards and gives away way too much information; it's almost as if it were written by someone who only read the last half (or third) of the book.  What the book *is* about is Meihua, a woman living China, her heritage is that of an American mother and Chinese father.  She knows nothing of her father.  We know she came to China in her early twenties fell in love with a Chinese man and stayed their for the remainder of her life.  As she finds out about her third pregnancy Mao's Cultural Revolution is well underway.  The two child policy is introduced, both she and her husband are teachers and thus in need of re-education.  Her husband is sent to a work camp for many years, after she gives birth Meihua is sentenced to prison for thirteen years for being an anti-revolutionary because she is half-American.  Her children are subsequently raised by their housekeeper/cook who is more like a member of the family.

For more than half of the book we experience the Cultural Revolution through the eyes of Meihua as she struggles to survive in a prison labour camp for the simple crime of her parentage; also through the eyes of her children who grow up without their parents for around 7 years.  We see how this scary regime affected both the once middle-class and the peasant class people in such a manner that everyone was controlled by the government and the whims of a charismatic leader.  The story is well-written and I enjoyed the author's voice.  This is a slow novel, without much fast action, yet it has its series of major plot points.  Having lived through the Cultural Revolution herself the now Canadian resident author shows us how ordinary people, villagers, peasants, teachers and a doctor's family are affected by this system that no longer respects education or personal success, yet still keeps the weak and poor just as bad off as they ever have been.
Towards the three-quarter mark the story progresses into a family generational saga as Mao dies and the new leader opens relations with the West.  Mei's mother comes to China to visit for the first time and Mei's daughter Yezi becomes interested in the American/Chinese history of the family, searching out clues and answers to why the family is split between America and China and whatever became of her mother's father, whom Mei herself never met. A lovely story that will appeal to women readers who like multigenerational stories, historical tales of China and those who want to explore the real evils of Communism and especially the consequences of an all powerful charismatic leader such as Mao Zedong.
Labels: 2011 asian Canadian author China historical fiction