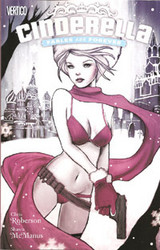 Cinderella Fables are Forever by Chris Roberson. Illustrated by Shawn McManus (US) - (Canada)
Cinderella of Fables, #2


First sentence: "Ask anyone who has lived through one and they will tell you: a Russian winter is no kind of fun."

Publisher's Summary: Fabletown's favorite secret agent and bon vivant Cinderella is back on the job in this title collecting the hit miniseries! Someone is killing sorcerers out on the Farm, and all signs point to Cinderella's archnemesis from the old days. The only problem is, Cinderella has always believed that her nemesis has been dead for years.

Acquired: Purchased a new copy from an online retailer

Cinderella is a spin-off from the Fables canon, but this particular volume's storyline takes its plot from the pages of Jack of Fables.  It is not necessary to have read either series as all the background is filled in for you, but loyal fans who read everything Fables will be tickled with the return of a Jack of Fables character and a flashback to further explain some lose ends from the beginning of that series.  I just love Cinderella!  Ever since we found out her secret identity, she has been a really fun character for me and this volume focusing on her exploits is no exception.  Full of action, especially cat-fights.  I always enjoy watching two powerful women duke it out (Alias, anyone?).  There is a big surprise reveal when the nemesis is shown to be a certain person we've assumed out of the picture since early Jack of Fables days and then the theme carries over tones of their fairytale homeworld.

This volume gives us a lot of background on Cinderella's past adventures, helping flush out her character's alternate life, not just the princess we see often in Fables.  Only one thing bothered me and that was the inclusion of Fables issue #51 stuck onto the end of this volume.  It had nothing to do with the Cinderella plot.  Yes, it was a story that featured Cindy, but it goes waaaaay back to the time before the Fables had even fought against the Adversary, this is ancient history by this point in the Fables sequence and really dredges up some old times and I found it hard to put myself back into the past for just this one short story!  It was a cute story but really should have been used in the Fables volumes sequentially where it would have fit in.  This is the reason I give the book a 4.5 rather than the full 5 stars.
Labels: 2012 fairy tales fantasy graphic novel