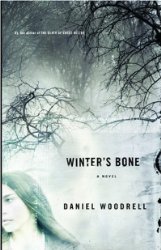 Publisher's Summary: The sheriff's deputy at the front door brings hard news to Ree Dolly. Her father has skipped bail on charges that he ran a crystal meth lab, and the Dollys will lose their house if he doesn't show up for his next court date. Ree's father has disappeared before. The Dolly clan has worked the shadowy side of the law for generations, and arrests (and attempts to avoid them) are part of life in Rathlin Valley. With two young brothers depending on her and a mother who's entered a kind of second childhood, sixteen-year-old Ree knows she has to bring her father back, dead or alive. She has grown up in the harsh poverty of the Ozarks and learns quickly that asking questions of the rough Dolly clan can be a fatal mistake. But along the way to a shocking revelation, Ree discovers unforeseen depths in herself and in a family network that protects its own at any cost.

Reason for Reading: I enjoyed The Death of Sweet Mister so much I wanted read another book by the author right away.

Brilliant!  A dark tale of a dirt poor Ozark family.  Ree Dolly is 16, with hopes of escaping this life by joining up with the army when she comes of age, but her future plans are turned around when her meth lab running father skips out on his bail with his house and land as collateral leaving Ree alone with two young brothers and a mother who lost her sanity years ago.  Ree must find her father before his court date and this takes her over to the other mountain clans who are by blood distantly related but more separated by clan than having any feeling as kin.  Her entrance into this ruthless world where secrets to her father's whereabouts lie bring her as close to the ugly, scary truth she's ever been.  Beaten and broken with the court date past, Ree has thirty days left to prove her father is dead and couldn't attend the trial, bring forth in her a country girl warrior she never knew she possessed.

A book written with beautiful, lyrical words as it describes a life of brutal kill or be killed life.  A life where children (especially the boys) are groomed to become criminals from their earliest days with no chance to ever become anything more.  In a way this book is a companion piece to The Death of Sweet Mister, where that tells the story of a boy's coming of age in these circumstances without any hope "Winter's Tale" tells the story of a girl's coming of age  in more or less the same sort of circumstances and yet she does have hope as her femaleness gives her an edge over her male peers and even though her world is brutal and violent there is also a close family love that exists within that framework which Sweet Mister never got to experience.

A sad, dark story of a world where one lives by the unspoken code; where the consequences are to kill or be killed.  A gut-wrenching ending that takes some characters down the road to the point of no return while giving others redemption and a chance to break the mold.  A tale that is both ugly and beautiful at the same time.
Labels: 2006 noir southern fiction