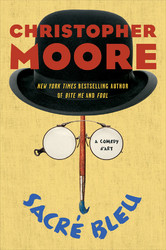 First sentence: "On the day he was to be murdered, Vincent van Gogh encountered a Gypsy on the cobbles outside the inn where he'd just eaten lunch."

Publisher's Summary:  A rollicking tale that features special printed map endpapers and more than two dozen masterpieces of art throughout the book, Sacré Bleu is better than a day at the museum!

It is the color of the Virgin Mary's cloak, a dazzling pigment desired by artists, an exquisite hue infused with danger, adventure, and perhaps even the supernatural. It is . . .

In July 1890, Vincent van Gogh went into a cornfield and shot himself. Or did he? Why would an artist at the height of his creative powers attempt to take his own life . . . and then walk a mile to a doctor's house for help? Who was the crooked little "color man" Vincent had claimed was stalking him across France? And why had the painter recently become deathly afraid of a certain shade of blue?

These are just a few of the questions confronting Vincent's friends—baker-turned-painter Lucien Lessard and bon vivant Henri Toulouse-Lautrec—who vow to discover the truth about van Gogh's untimely death. Their quest will lead them on a surreal odyssey and brothel-crawl deep into the art world of late nineteenth-century Paris.

Reason for Reading: I read every new book by the author.

Christopher Moore brings us another fun satire this time taking place in 1890's France in the demimonde of the Parisian Impressionist artists.  A good dose of historical fiction is mixed with plenty of the fantastical and paranormal to present a totally new view of the history of art.  As is to be expected with Moore the story is very raunchy and won't suit everyone's sensibilities.  Moore has a habit of poking fun at pretty much everyone making for some humorous reading.  I didn't find Sacre Bleu as laugh out loud funny as some of his older work, but it did have its moments when my chuckles became audible.  Moore inhabits his stories with large casts of eccentric characters and here he has risen to the challenge once again with a large number of real-life characters, painters from the time period, especially Toulouse-Lautrec who is one of the main characters. The lead male role is an unassuming man who is easily lead into this exotic adventure  and the two antagonists are other-worldly and strange.

The story revolves around a mystery involving the colour blue and it takes the motley crew of characters to gypsum mines, brothels, bakeries, underground passageways and catacombs.  It also takes them through time to Ancient Rome, Britain of the Picts, Prehistoric man and eventually the 21st century.  I had fun reading this.  It's not Moore's best work.  I enjoyed it more than Fool since it wasn't quite so vulgar, though, it is racy!  I already knew a bit about this period, had heard of and was familiar with the artists and their work and I know that added to my enjoyment of the book.  I'm not sure how it would go over with someone totally unfamiliar with this topic or time period.  A fun read, what one expects from a Christopher Moore book and one sure to please fans but personally, I'm still waiting for one to match the excellence of A Dirty Job.
Labels: 2012 art historical fiction humour magical realism paranormal Victorian