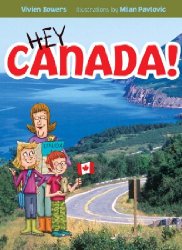 
Gran has decided that she is taking nine-year-old Alice and eight-year-old Cal on a road trip across Canada “before she’s old and creaky.” With a sparkling combination of poems, silly songs, tweets and blogs, the trio records the trip for readers everywhere to share. Starting in St. John’s Newfoundland, where they have a “find-it” list that includes a moose and an iceberg and going all the way to the Pacific Ocean, the gang in Hey Canada! offers a delightful way to learn about vast, varied, and surprising Canada.

The book combines narrative, poems, photos, comics about historical events such as the battle at Fortress Louisburg, maps (including provincial flags, birds, and flowers), in a lively, easily accessible format. Not only great fun to read, this is a valuable resource for young Canadians and for visitors across the country.

Reason for Reading: Always on the lookout for good books about Canadian geography.  There are plenty around these days, but not many I'd label much better than just OK.  This book's format and artwork attracted me.

I've read several children's Canadian geography books and while they get the job done,  dull is usually the optimum word.  Either that, or they become pages of factoids with no narrative to carry the book.  Bowers' "Hey Canada!" manages to avoid these pitfalls and brings to elementary children and interesting, entertaining and educational tour of our country province by province.  Divided into chapters which each are devoted to a province or territory, the story is told in a narrative from the girl, Alice's point of view.  She is purportedly recording all this on a blog of their adventure.  Her cousin Cal, who is younger than her, but also the brainy one, will come up with interesting factoids to Tweet as he is the official Twitter poster of the group.  In this way the journey across each province is told in a fictional story of the family, with humour, Gran is a fun young grandmother and they've got their pet hamster traveling with them by supposed accident.

As the story is told the facts are presented about each province and area concentrating on all things a tourist would like to know about: the wildlife, the land, the history, the peoples, the customs and specifics unusual to each area.  Some provinces are given more page space than others; of course Ontario has the most pages devoted to it and Saskatchewan is lucky to get three but I think a fair shake has been given to all the p's and t's outside of over-represented Ontario and Quebec.  Plenty of interesting, positive information has been given leaving the reader with a sense of wanting to really visit these places.  While the main characters are 8 and 9, I think the book will hold the interest across the elementary grades of 1-6, certainly as an introduction to Canada as a whole and the provinces/territories singularly.  I'd recommend this as a quick brush through the topic or as a starting point, using other books to branch out into deeper study.  The most entertaining Canadian geography book out there at the moment, that I've seen.
Labels: 2012 Canadian author children non-fiction