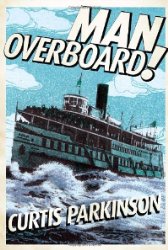 First sentence: "At a blast from the ship's horn, the lines were cast off."


During World War II, a German agent landed in Canada from a U-boat. Curtis Parkinson has used this true historical event to tell a fast-paced, exciting story. Sixteen-year-old Scott and his friend Adam find summer jobs as deckhands on the Rapids Prince, a ship that plies the waters between the town of Prescott, on the St. Lawrence River, and Montreal. Scott overhears convincing information that a German agent is actually on board the boat. He has a good reason for not telling anybody, but his silence eventually leads him into more trouble than he can imagine, including a possible murder and a kidnapping. It is up to the boys to expose the agent in order to save the Rapids Prince and the innocent passengers on board.

Reason for Reading:  Sounded like a book my seafaring adventure loving son would enjoy.  Plus I had not heard of this Canadian author before and yet he has written a handful of books!

A very satisfying book!  This book is mostly going to be enjoyed by a specific audience.  Boys from the ages of 10 to 12.  However the main characters are around sixteen, with girlfriends, thus it will also appeal to reluctant teen readers.  The plot is an action-packed adventure without too much time for character development but enough to get a sense of where these teens come from, what type of families, the kind of upbringing they've had and their character.  No time is wasted with introductory passages.  The reader is set right into the story as Scott overhears information about a German spy aboard the ship upon which he works.  What ensues is typical action/adventure as he and his friend Adam get involved.  Sneaking around at night, getting kidnapped, blindfolded, lives threatened, hearing plans of a bombing and a daring escape to save not only their ship but the future of the war effort at home.  A patriotic story with some fascinating WWII history for teens who may not have learned just how close the Germans came to Canada during the war.  It is a matter of record that German U-boats landed German spies on Canadian soil on at least three separate occasions.  I'm saving this one for a bedtime read for ds; it will be right up his alley and have him on the edge of his seat.
Labels: 2012 Canadian author historical fiction WWII YA