153. Captured By Pirates! by Agnieszka Biskup 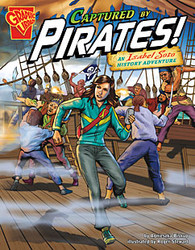 
First sentence: "What a great assignment!"

Publisher's Summary: "In graphic novel format, follows the adventures of Isabel Soto as she learns about pirate life during the Golden Age of Piracy."

Reason for Reading: I've enjoyed other books in this series.
Great introduction to the world of pirates and privateers in the 1700s.  Isabel's time travel is more believable than in the Egypt book I just read, as her popping up does startle the natives, so to speak.  Isabel is aboard a British merchant ship when it is attacked by pirates, then she and the ship's doctor are kidnapped and taken aboard the pirate ship.  Explains the life of a pirate, how the sailors became pirates in the first place, the difference between pirates and privateers and the fact that pirates still exist today.  Interesting and exciting.
Labels: 2012 children graphic novel history non-fiction science fiction