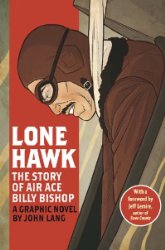 Publisher's Summary: "As a boy, Billy Bishop was a crack shot - he had a sharp eye and great aim. Nearly flunking out of Royal Military College in Kingston, he eagerly signed up for duty when the First World War broke out. Sent first to England, Bishop discovered his true love: the Royal Flying Corps. Up in the air, the fighting may have been "cleaner" - no trenches, no mud, no mustard gas - but it was extremely dangerous and difficult. In fact, most fighter pilots in the First World War would not shoot down even a single plane.

Bishop soon proved himself to be a fighter pilot with an unerring instinct for aerial combat. He practiced relentlessly and would never land his plane before firing off every bullet, diving on targets he'd set up beforehand. The practice paid off. Bishop racked up seventy-two officially confirmed victories and was awarded every major medal, including the Victoria Cross. By the end of the war, he was considered so valuable as a symbol of the war effort that Canadian authorities insisted he be grounded: his loss would have been devastating to all Canadians."

Reason for Reading: When I was looking up `Hyena in Petticoats' I found this book which belongs to the same publisher`s series, though I can find no name for the series or other books.  These two books are obviously matching volumes though.

Before reading this book I knew who Billy Bishop was, but I didn't know anything about him.  I could have given a one sentence description that covered the basics and that was all.  I found this graphic biography to be very entertaining and informational.  Of course, it leaves many details out and concentrates on Bishop's time flying as a fighter pilot in France where he was virtually mad with shooting down the Hun before they got him or his men.  From this biography Billy comes across as patriotic, a natural born "good shot" and having a fierce hatred for the enemy, simply because they were "the enemy".  I didn't find him particularly likable, in fact, his character was quite questionable.  Most WWI books I've read are about the trench warfare and this look at the airforce side of the war was very different.  After reading the book I searched around to find out more about Billy and found this book had skipped entire chunks of his life but had kept to a fairly specific theme in Bishop's life: his daring fighting victories and his numerous medals won.  I could find nothing referring to his personality or character but his lifestyle certainly reflects the type of man depicted here.  A very well-done graphic novel about an interesting man whom I wouldn't mind reading more about.
Labels: 2011 biography Canadian author children graphic novel history non-fiction war wwi