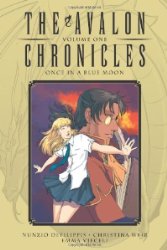 Once in a Blue Moon by Nunzio DeFilippis & Christina Weir. Art by Emma Vieceli (US) - (Canada)
The Avalon Chronicles, Volume 1

First sentence: "We return now to the kingdom of Avalon with the sun shining high over Walden Castle."

Publisher's Summary: "When Aeslin Finn was a little girl, her parents read to her from a magical book called THE AVALON CHRONICLES. But that was a long time ago. Now a teenager, Aeslin is about to discover just how magical she and that book really are. Transported to the world of Avalon, she discovers a kingdom in need of a Dragon Knight - and the last dragon, Blue Moon, is waiting for her!"

Acquired: Received an egalley from the publisher.

This is a good beginning to a potentially great series.  The plot (in this volume) starts off fairly cliched with a girl finding out she is the prophesied saviour of another world.  It then continues to go on in a routinely predictable manner, ending with an interesting reveal. Along with the reveal the book also has other points going for it which lead one to believe that this first volume is only weak in that it is setting the groundwork and I am much intrigued as to what will come later.  The book is rated all ages and has a main character 16 years of age, from this first book I'd say the author has done a good job of writing something that will appeal to both children and teens.  Aeslin is a spunky and smart girl.  Right away she stands up for herself and yet she notices what she will have to do to fit into this medieval-style world.  I like the fact that her parents are involved in the story and a major part of the plot as we go into it.  The artwork is typical non-Japanese manga and tells the story well, the men are quite beautiful without being feminine.  The travel between the worlds via the storybooks is one I've seen done before but have always enjoyed.  It can provide the opportunity for some interesting situations.  The reveal at the end was predictable but sets an interesting storyline in motion; along with finding all the characters likable and engaging, I'm quite looking forward to seeing where this series will go.
Labels: 2012 children fantasy manga YA