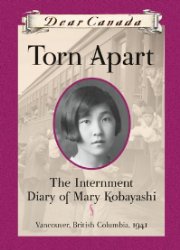 Publisher's Summary: "It is 1941 and Mary Kobayashi, a Canadian-born Japanese girl enjoys her life in Vancouver. She likes school, she likes her friends, and she yearns above all else to own a bicycle. Although WWII is raging elsewhere in the world, it hasn't really impacted her life in B.C.

Then on December 7, 1941, Japan bombs Pearl Harbor. . . and everything changes.
Suddenly a war of suspicion and prejudice is waged on the home front and Japanese-Canadians are completely stripped of their rights, their jobs and their homes. Mary is terrified when her family is torn apart and sent to various work camps, while she and her two sisters are sent, alone, to a primitive camp in B.C.'s interior. Here Mary spends the duration of the war, scared and uncertain of how it will all end.

In Torn Apart, author Susan Aihoshi draws from the experiences of her own family during "The Uprooting" of the Japanese in B.C. during WWII. Through young Mary's eyes, readers experience this regrettable time in Canadian history firsthand."
Acquired: Received a review copy from Scholastic Canada.

Reason for Reading: I'm working my way through reading this series.

One of my favourite WWII topics is the Asian Holocaust and the Japanese internment is a Canadian homefront bi-product.  This is a very fast-paced interesting story and gives a good child's eye view of what happened during this time in Canada's own and the world at large's history.  Of course a book like this cannot examine such a complicated situation both socially and historically to fathom the how and why of such events happening.  I give props to Ms. Aihoshi for mentioning at least two facts.  In one sentence she mentions the unnamed atrocities that the Japanese are inflicting upon the Chinese as they invade that country and in another sentence she mentions the Japanese submarine shelling aimed at a lighthouse on Vancouver Island.   This at least sets the story in some political light but of course this book is not about that, nor did I expect it to be.

What it does do is highlight the feelings of a people when they are rallied against because of their ethnic heritage no matter where they were born or where they have lived.  It is a terrifying situation and this first-time author describes it well through the eyes of a young girl and what she sees through her large Catholic family and neighbours' behaviours.  We also see the resilience of people when they are brought together in tough times and how they can either decide to give up or pull together and make the most of a poor situation.  Many bad things happened because of the internments, loss of property, items of personal value, businesses and homes; but many people managed to make their life better than before by moving to different parts of Canada and taking on new ways of life.  The Japanese eventually won the rights they had been seeking some years after the war and received redress and restitution in 1984.  A heart-warming, tender and often frightening story of a family who lost their rights in a free country.