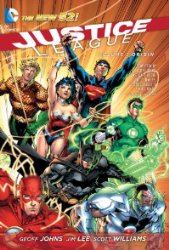 
First sentence: "There was a time when the world didn't call them its greatest super-heroes."

Publisher's Summary: "As a part of the monumental DC Comics—The New 52 event, comics superstars Geoff Johns and Jim Lee bring you an all-new origin story for the Justice League!
In a world where inexperienced superheroes operate under a cloud of suspicion from the public, loner vigilante Batman has stumbled upon a dark evil that threatens to destroy the earth as we know it. Now, faced with a threat far beyond anything he can handle on his own, the Dark Knight must trust an alien, a scarlet speedster, an accidental teenage hero, a space cop, an Amazon Princess and an undersea monarch. Will this combination of Superman, The Flash, Cyborg, Green Lantern, Wonder Woman and Aquaman be able to put aside their differences and come together to save the world? Or will they destroy each other first?"

Acquired: Received an egalley from the publisher through Edelweiss.

Reason for Reading:  I was interested in checking out this "new 52" event  and have always enjoyed the super-hero teams including The Justice League.

I enjoyed this immensely!  I am coming at this as an occasional comic reader.  I love DC's universe and grew up reading secondhand comics and today read the occasional graphic novel when the mood suits me though I haven't read any series for some years now.  My review is from this "occasional reader" point of view.

I just loved coming into all these familiar characters anew, with a fresh start in the modern world joining up together for the first time.  I found the story exciting and a thrill to read.  The villain in this volume is Darkseid and his first appearance in the book is stunning.  The artwork throughout is fantastic.  The story not only gives us the origin story of how the Justice League came to be but also gives us the origin story of Cyborg which is very satisfying.  As usual I also enjoy the humour and an ongoing theme was Green Lantern's taunting Batman that he has no super powers.  To paraphrase:  You're just a guy in a bat suit?  What, are we going to talk to them in a deep voice?  A lot of fun and I enjoyed the team's interactions with each other.  No one is really thrilled to be joining together as a group, except Batman.  He is the only one who sees the need for them to make a joint effort to show the citizens of Earth that they (super-heroes) are the good side.  This is a great way to get back into the universe and find your favourite characters fresh without previous baggage.
Labels: 2012 graphic novel superheroes