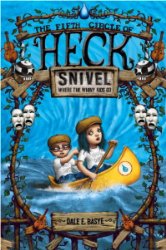 
First sentence: "Milton Fauster - eleven years old at the time of his untimely death - looked outside past the marble balcony jutting over the crater, stunned as he took in the dreary spectacle of Snivel."

Publisher's Summary: "Dale E. Basye sends Milton and Marlo to Snivel, the circle reserved for crybabies, for their latest hilarious escapade in Heck. Snivel is a camp—a bummer camp—a dismal place where it's always raining, and Unhappy Campers are besieged by swarms of strange mosquitoes that suck the color right out of them. Soon the Fausters discover that some Unhappy Campers have been disappearing. So after Marlo gets chosen for a special project and never comes back, Milton makes up his mind to find her and all the missing children.

Can Milton find his sister and get the heck out of Snivel? With the help of some new friends, his pet ferret, and Vincent Van Gogh's ear, he just might have a chance."

Acquired: Received an egalley from Netgalley.

Snivel continues on with more of the same of what we've come to expect from this series by this time.  Book Five is not as good as the last book but stands strong along with the others.  The plot will really be a lot of fun for kids as the majority of the action takes place with Milton & his new group of friends inside a video game version of "Heck: Where the Bad Kids Go".  This time Milton and Marlo start out together and are quickly separated.  The narrative switches alternately between each of them as they each have their own individual adventure.  There are not so many famous people that they run across this time but more plays on words such as at the monastery they meet Abbot Costello.  Probably more recognizable by mom and dad than the intended audience.  Likewise the two main antagonists are Edgar Allan Poe and a dude named Provost Marshal Tesla.  Now most will know who Poe is, the other took me some research.  I knew from Bayse's technique that he had to be based on a real person.  His character was a foreign mad scientist heavily involved in electricity experiments and he was behind this whole video game scheme.  It is not until near the end of the book that Tesla's first name is mentioned and a simple google lead me to the real "mad scientist".  But this is all likely to go over the intended audience's head.  But again *I* enjoyed the detective work!

The story is fun, kids are going to enjoy it, the new characters introduced are a wacky bunch and will be appreciated though it is disappointing not to have the return of any old classmates.  This is slightly made up for by the return of Milton's pet ferret, Lucky, who has either been missing or played an insignificant role in the last few books.  Lucky is back in the limelight in Snivel and he is a warm welcome back.  The author himself is back as a main character, which I'll admit is a bit strange but Basye makes it work and this seems to be the end of it.  I don't think it would hold up well as a long running joke, but over the two volumes it was a fun side story.  There is a very brief return of two old teachers who have popped up several times now and it appears this may just be the last of them.  A fun story with lots of action, especially in the Milton story arc.  Religion plays a very small part in this volume and both Satan and the Big Guy Upstairs make small appearances, as do the archangels.  Marlo and Milton finish up being sent to Precocia, which we will have to wait until next year to read in Precocia: the Sixth Circle of Heck.
Labels: 2012 children's books fantasy humour paranormal