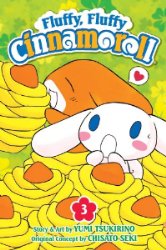 
First sentence: "Cinnamoroll brought a treasure chest with him from the sky."

Publisher's Summary: "The Cinnamon Friends read about the Land of Sweets on a stone tablet they discover in Cinnamoroll's treasure chest. They set out to find this mysterious place and come across a new candy shop with a long line of people in front. Could this be the place they're looking for?"

Acquired: Received a review copy from Simon and Schuster Canada.

The third volume in this delightful kids' manga aimed at girls brings about some subtle changes.  The first is the entire exclusion of the former nemesis of the pups, Cavity.  He does not appear in this volume at all, nor is he mentioned; it is as if he never existed.  This is no loss to the story as he was a bit lame of a bad guy.  Instead the pups' nemesis is now themselves as they get along as a group of friends having to deal with each others feelings such as jealousies, competition, anger, etc.  They do run into random "bad guys" though.  Also while maintaining the short story presentation of the former volumes, the "sections" are much more related to each other creating mini story arcs that are joined together (some more so than others).  This book ends with a final section called "We're the Cinnamon Angels" where the girl pups have made themselves a clubhouse and they have their own adventures without the boys.  These are cute and deal with more girl subjects such as fashion and cute boys.  Only thing that bothered me is a new character is included here, making a group of three girls, who has never appeared in the series before; an introductory story first would have made sense.  Overall, this volume is the best of the three so far and I hope the others continue with this new form.
Labels: 2012 children fantasy humour manga