127. Stink and the Midnight Zombie Walk by Megan McDonald 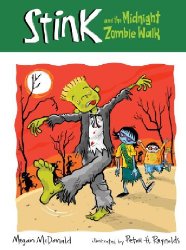 Publisher's Summary: "Guts! Brains! Eyeballs! There's only one week before the new book in the Nightmare on Zombie Street series comes out. Of corpse Stink will be first in line at the Blue Frog Bookstore to buy his copy and join the town's Midnight Zombie Walk! Until then, Stink and his friends keep busy making ketchup-stained zombie costumes, trying to raise money to buy the book, and racking up points for Virginia Dare School's race to one million minutes of reading. But with all that talk about the undead, Zink - that is, Stink - starts to wonder: is he being hunted by zombies? He does have a very delicious - er, superb - brain, after all. Readers will just have to open ze book and zee! Mwa-ha-ha-ha!


Reading is UNdead - and everyone has zombies on the brain - as Stink's school and a local bookstore cook up a frightfully fun Main Street event."

Ds loves this series of books.  This is the first time he did the reading aloud as his reader.  They are a little hard for him and halfway through a chapter I'll take over and read a few pages for him to take a breather, then he'll finish up the chapter himself.  This one was a lot of fun with the zombie theme but not having any actual supernatural events.  The reading theme and the excitement over a new book in a popular series was fun as well.  Not a lot to actually say in this review as we happily received everything we expected in a Stink book and enjoyed it to the max.  These books are keepers on ds's shelves, which is a very highly coveted spot indeed; only a select few make the cut.  Looking forward to the next book.
Labels: 2012 children's books early chapter books humour realistic fiction