126. Blink and Caution by Tim Wynne-Jones 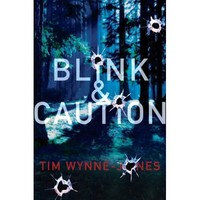 First sentence: "Look up at the Plaza Regent, Blink, in the shivery morning light."

Publisher's Summary: "Boy, did Blink get off on the wrong floor. All he wanted was to steal some breakfast for his empty belly, but instead he stumbled upon a fake kidnapping and a cell phone dropped by an "abducted" CEO, giving Blink a link to his perfect blonde daughter. Now Blink is on the run, but it’s OK as long as he’s smart enough to stay in the game and keep Captain Panic locked in his hold. Enter a girl named Caution. As in "Caution: Toxic." As in "Caution: Watch Your Step." She’s also on the run, from a skeezy drug-dealer boyfriend and from a nightmare in her past that won’t let her go. When she spies Blink at the train station, Caution can see he’s an easy mark. But there’s something about this naïve, skinny street punk, whom she only wanted to rob, that tugs at her heart, a heart she thought deserved not to feel. Charged with suspense and intrigue, this taut novel trails two deeply compelling characters as they forge a blackmail scheme that is foolhardy at best, disastrous at worst - along with a fated, tender partnership that will offer them each a rare chance for redemption.

Two street kids get tangled in a plot over their heads - and risk an unexpected connection - in this heart-pounding thriller by Tim Wynne-Jones.

Reason for Reading:  I've always wanted to read this Canadian author but I've never got around to it.  I just recently heard he'd been awarded the Order of Canada and thought it was time I read him and had this book on hand.

A fairly decent book, not really my usual thing as it deals with two runaway teens.  One from a dysfunctional family, the other running from a life-changing event that is easy to guess, revealed too soon and would have been a better plot point if it had been kept as a secret to shock later in the book.  The plot is quite interesting and the teens are well developed, both, though having problems, are likable from the beginning and the reader is invested in their well being.  A tight crime thriller for this age group that mainly keeps the plot together though their are a few holes.  I especially wondered why Alyson, as a character was left dangling.  The thing that most annoyed me about this book though was that part of it is written in the second person.  Chapters alternate between Blink & Caution's stories.  Caution's tale is told in the third person, but Blink's is in the second person.  The continual referral to you are doing this and you are thinking that was extremely annoying to me and I kept wondering *who* was talking to Blink and telling him/us his story.  It is never explained and I, personally, do not like the literary device at all.  However, a decent YA thriller.  I will try another of the author's books ,having one more on my shelves, but I am in no rush.
Labels: 2011 Canadian author crime realistic fiction thriller YA