122: Heresy: Ten Lies They Spread About Christianity by Michael Coren 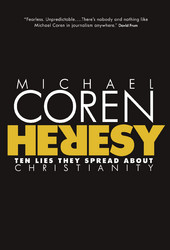 Heresy: Ten Lies They Spread About Christianity by Michael Coren. (US) - (Canada) - (Kindle)

First sentence: "In the summer of 2011, a horrendous mass murder occurred in Norway, with more than ninety people, most of them teenagers and even children, being slaughtered in a co-ordinated bomb and gun attack."

Publisher's Summary: "Michael Coren explores why and how Christians and Christian ideas are caricatured in popular media as well as in sophisticated society. He takes on, and debunks, ten great myths about Christianity: that it supports slavery, is racist, sexist, homophobic, anti-intellectual, anti-Semitic, provokes war, resists progress, and is repressive and irrelevant. In a climate that is increasingly as ignorant of Christianity as it is good at condemning it, Coren gives historical background, provides examples of how these attacks are made, and explains the reality of the Christian response, outlining authentic Christian beliefs."

Reason for Reading:  I'm a fan of Michael Coren both in print and on TV, I enjoyed his last book and the topic is of interest to me.

Reading this book is like sitting down and having an intelligent conversation with someone who  shares all your interests but happens to have quite a bit more knowledge on the subjects than you do.  Totally fascinating.  Awe-inducing.  I have basic information on these topics to begin with but Mr. Coren goes deep into the historical background of Christianity on many varied aspects and this book is a goldmine of inspiring information.  Coren proves all his conclusions with samplings from the words of great thinks throughout the ages and my list of authors to read in the future has multiplied: from ancient sources, to saints, theologians from the middle ages up to scientists, newscasters, medical professionals and so on.

Coren's purpose in this book is to provide the Christian with "logical ... self defence." "A handbook for followers of Christ who want to intellectualize the instinctive and provide a solid response to the increasingly malicious anti-Christian propaganda campaign...."  This book is certainly for the intellectual but also for the person wanting to put their thoughts together more intellectually with the right materials.  It's all here, everything you could possibly want to know to defend ten common misconceptions about Christians (regardless of denomination), but it is also simply terribly informative to someone who doesn't know his own Christian heritage, our heroes, how we shaped the world, how we changed the world, what the world would look like today without the advancements made by Christians whose Christianity made them seek out to better the world.  Fascinating reading!
Labels: 2012 Canadian author catholic christian non-fiction