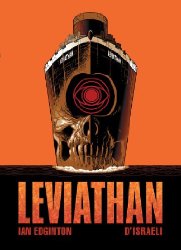 Leviathan by Ian Edginton.  Art by D'Israeli (US) - (Canada)

First sentence: "The Lowenstein's killed themselves today.  Issac and Julia."

Publisher's Summary: "In 1928 the largest cruise liner the world has ever seen is launched. With a crew and passenger complement totalling nearly 30,000 people the Leviathan is bound for New York. However, it never reaches the Big Apple and simply… disappears!

Twenty years later – with the Leviathan stranded on an unearthly sea – Detective Sergeant Lament begins to investigate the mystery at the liner’s heart. What he discovers will change his world forever — but it might just bring the Leviathan home…"

Reason for Reading:  I love the lost ship, The Flying Dutchman, type of ghost story.  Obviously there is a "Titanic" feel to it and I liked the appeal of a cross between crime and horror.  Pretty much just had to read it after seeing the book!

One of my favourite graphic novels of the year and quite apropos that I read it shortly after reading an anthology of early 19th century ghost stories.  This just fit my mood at the time so well.  First of all the book contains the main story "Leviathan" which ran in over 10 issues of "2000AD" plus also includes 3 later published graphic short stories which take place sometime during the original main story.  An absolutely fantastic, creepy, haunting, paranormal tale of a ship lost in Limbo for twenty years and the discovering of what has been keeping it there.  The investigation by a former Scotland Yard detective of a series of atrocious First Class murders brings to a head the evil that is hiding (well-not really hiding anymore, eh?) deep inside the ship.  This story is first-rate.  The illustration, done in black & white is outstanding.  This type of horror, for me, needs the finesse b/w adds to the grotesquerie when our minds are allowed to imagine the colour of the blood and gore rather than being blasted with it in full-colour.  The demon's first appearance in the book is an amazing feat of awesomeness.  One is stunned.  I am so glad I've found this team of writer/author; they have done other work together which I want to explore.  The three short stories are also fine examples of horror stories and take us back to the days when the ship is lost and introduce a few tales of events that happened, now that we know what was really going on there.  I loved this and will probably read it again in the future.  A Keeper for me!
Labels: 2003 2012 graphic novel historical fantasy horror paranormal