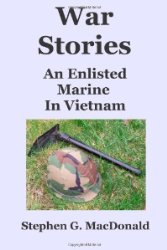 First sentence: "It was early November of 1965, and I was a few weeks shy of my nineteenth birthday."

Publisher's Summary: "War Stories: An Enlisted Marine In Vietnam tells what it was like to enlist in the United States Marine Corps and serve as a field radio operator with an infantry battalion operating near the southern edge of the DMZ in Vietnam in 1967. If you want to understand how the Marine Corps training and months of heavy combat can change a young man, then read this book."

Reason for Reading:  I enjoy first hand war accounts.  I'm a firm supporter of our troops and being an ex Army wife allows me a very small insiders knowledge of what servicemen are speaking of and what those left at home go through.

Steve MacDonald has not written the great American novel but he has written the great story of his life.  MacDonald is a natural writer with a storyteller's voice which is very easy to read and puts you right there with him.  He is writing of something that happened many years ago in his past and writes in a first person past tense as he describes events as they occurred but with the hindsight of a now grown man telling of a young 19/20 year old's actions and thoughts.

I like Stephen.  He is a nice guy.  As a 19yo enlisting in the Marines in 1965 he was a kind of naive that doesn't exist in our teenagers/young people of today and in that sense he brings back a time when people actually did believe in fighting for one's country.  He has many experiences in his early days of basic training and in Vietnam that accentuate this "doing the right thing" and his innocence.  One such episode that reinforces this is his mention of being a virgin, and having expected to be so until he married, but once in Vietnam, on a weekend leave he took care of that because he didn't want to die without "having known a woman".

I really enjoyed the whole basic training story; it's the usual tearing you apart and then rebuilding you up, learning to be a team not an individual but MacDonald tells his story in a very readable, almost novel-like voice and the whole book is full of anecdotes, some hilarious, some sombre.  Stephen's tale of serving in Vietnam for 13 months is the story of one man's war but probably also the story of everyman's war as well.  With no great deeds of heroism attached to his name, nor exposure to hideously horrendous horrors he still saw his share of terror, friends being blown apart, exposure to Agent Orange, received one Purple Heart for a small wound he was embarrassed of (comparatively).  This all changed the innocent 19yo who enlisted because he wanted to be a Marine and serve his country as two generations of his family before him did.  Serving his tour of duty, he returned a combat hardened 21yo who had experienced death and crippling fear only to return to a country that offered no thanks for the service he had given.  However, even though MacDonald ends the book with his homecoming he does not seem to have become embittered as his book is written with a light touch, even though there are parts where he expresses annoyance or anger at military hierarchy, the "hurry up and wait" attitude and the often senseless loss of life.  Stephen still comes across as a nice guy, one you would like to sit down with and listen to some of his war stories.  A well-written and engaging book with an insightful look at the everyday life of a radio operator in Vietnam.  Thank you for your service Mr. MacDonald and thank you also for sharing your personal story.
Labels: 2011 memoirs vietnam war