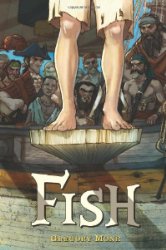 Fish by Gregory Mone. Illustrations by Jake Parker (US) - (Canada)

First sentence: "The rain had been falling heavily for weeks"


Publisher's Summary: "Fish--nicknamed for his incredible swimming abilities--is a twelve-year-old boy from a poor farming family. After taking a job as a courier for his uncle, Fish is waylaid by pirates, who steal the package he's carrying. He soon learns that it's the key to locating the Chain of Chuacar, a legendary treasure. As he works to earn the trust of Cobb, the fortune-hunting captain of the Scurvy Mistress, Fish learns of a mutiny headed by a nasty pirate called Scab. With time running out to find the Chain, Fish and some fellow shipmates still loyal to Cobb must thwart Scab's dastardly plan."

Acquired: Received a review copy from the publisher via the author.

Reason for Reading: Read aloud to my son. He loves seafaring tales, especially with pirates, while I, myself, am also a seafaring adventure fan, though pirates are not necessary for me.

Both the 11yob and I enjoyed this book very much.  It has everything you expect in a sea adventure.  Pirates, mutiny, treasure hunts, ship battles, a treasure map, walking the plank and oh so much more.  One element that is a lot of fun is that Fish, the main character, does not believe in fighting so to survive the pirate life he has a friend teach him the art of "non-fighting" which involves dodging the blows of someone intent on fighting *you* until they have exhausted themselves.  This makes for a non-violent, yet still action-packed read which is funny and makes for some great scenes of "non-fighting".  Fish is a well-rounded character and meets a small group of other young pirates, including one girl, who make a great team throughout the book.  The villains are nasty in a "boo-hiss" type of way, making them great fun to root against while the story stays light-hearted in its rip-roaring adventure.  A delightful story, that is a standalone book, with a satisfying end.  It will appeal especially to boys, but seafaring minded girls will find common ground with the two main pirate female characters.  Well written, plenty of action, with fun characters.  A rip-roaring good yarn!
Labels: 2010 children's books historical fiction