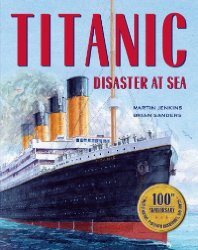 Titanic: Disaster at Sea by Martin Jenkins. Illustrations by Brian Sanders (US) - (Canada)

First sentence: "At nine o'clock in the evening on Thursday, April 18, 1912, in the middle of a tremendous thunderstorm, an ocean liner pulled slowly into New York Harbor and prepared to dock."


Publisher's Summary: "On April 14, 1912, the largest and finest ocean liner of the age struck an iceberg and sank to the icy depths. Here, in clear, compelling prose illustrated with evocative scenes, extensive diagrams, and historical photos, is the story of the Titanic’s rise and fall -- from details on her state-of-the-art design and widely varying accommodations to a timeline showing how structural and human failure contributed to her demise."

Reason for Reading:  I have had a lifelong fascination with the Titanic and am participating in a Titanic Reading Challenge as the 100th anniversary of the sinking is remembered this year.

This book is a reprint this year of a previously published "novelty 3D pop-up book".  The gadgets have been removed and we are presented here with the text and illustrations of the original book.  Unlike the majority of children's non-fiction books these days, the book is not divided up into 2-page spreads but rather reads straight through as one continuous narrative without chapter breaks.  However, the text is divided into subheadings which consist of blocks of text anywhere from one to several paragraphs long.  The font is quite large, the pages are colourful, and often white has been used to show up on a black background.  The illustrations are a combination of actual contemporary photographs, illustrations and diagrams.  The diagrams are a particular feature of this book that makes it different from others of the same ilk.  Rather than just explaining something with words, the very many diagrams throughout really help one to visual what is being talked about.  I enjoyed this aspect of the book particularly.

The book is also quite heavy on the before story of the Titanic, explaining just why the Titanic and it's sister ships (Olympic & Gigantic, later renamed) were built, when, and how they were.  It talks of the social atmosphere at the time, the reasons for sailing in these grandiose ships, the mindset of the people and the ship designers.  All this information is not usually gone into such detail in a children's book before the actually sailing begins.  We are even presented with a list of food items and linens brought aboard!  Once the boat sets sail the book takes on a narrative tone and nicely tells the story of the voyage in quite some detail taking right up to page 22 out of 31before getting to the iceberg hit.  What then follows is an easy to understand account of what probably happened minute by minute, then hour by hour and then the book finally ends briefly with the inquiry and Ballard's finding of the ship.

An enjoyable little book for a quick dip into the fatal voyage but more for those wanting the facts about the ship, its building, how it worked, was supposed to work, and the whys and wherefores of how it sank as opposed to those looking for something more personal.  The book is probably a lot more fun in its novelty presentation, however this one is only a fraction of the price of the one with all the bells & whistles.
Labels: 2007 2012 children's books history non-fiction titanic