110. Another Jekyll, Another Hyde by Daniel & Dina Nayeri 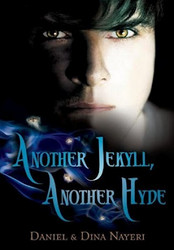 Another Jekyll, Another Hyde by Daniel & Dina Nayeri (US) - (Canada) - (Kindle)
Another Series, Book 3

First sentence: "A two-faced moon hung over the black-and-white city, in turns shining as bold as the sun and hiding, shamed, behind the veil of cirrus clouds."

Publisher's Summary: "When his billionaire father marries French governess Nicola Vileroy, high society is all abuzz - but Thomas, the most popular student at Marlowe, is just plain high. Ever since his girlfriend Belle dumped him, he's been spending less time with old friends and more time getting wasted at clubs. But after someone slips him a designer drug one night - and his stepmother seems to know way too much about his private life - things really start to get scary. As Thomas's blackouts give way to a sinister voice inside his head, and as news of a vicious hate crime has students on edge, Thomas comes to the sickening realization that Madame Vileroy has involved him in a horrifying supernatural plan. How can he muster the strength and will to stop it? The pulse-quickening climax revisits Jekyll and Hyde as a current-day cautionary tale laced with a heady dose of paranormal intrigue.


An elusive stalker is targeting Marlowe kids - and something unearthly has gotten into its wealthiest student - as the Another series builds up to a fiendish finale."

Reason for Reading: Next (and last) in the trilogy.

Before this book was published I heard it was going to be the final book, in what was now being called a trilogy.  I was quite upset to hear that this would be the last of the series but it was with great anticipation I looked forward to its publication and my reading.  I really loved this book and thought it was an entirely satisfying end to one of the smartest, intelligent YA paranormal trilogies I've read in years.

This series is quite different from the usual YA fare and one of the reasons I enjoyed it so much.  I've become quite tired of the vampire, werewolf, fairy and other supernatural creature storylines.  The Another series features a demon and her manipulation of teenagers for her own selfish means.  While the first two books' most common element was the school in which the teens attended, featuring different characters (for the most part), Another Jekyll, Another Hyde wraps both those stories together culminating in an unimaginable plot and conclusion.  All the characters from the previous two books return,with  some having small parts, others in major roles.  We learn how the events of those two previous books were leading up to the finale found here.

I found this book quite an adrenaline rush and read it very quickly.  Mind, it isn't a very long book and this is another kudos I give the authors.  So many YA authors seem to think that the last book in their trilogy has to be a 500-800 page tome, but the Nayeri's didn't fall into that trap.  They wrote a book as long as it needed to be to tell the story they wanted to tell.

The most important thing about the last book in a trilogy is whether you feel satisfied with having invested in the three books as a whole and I can say this was well worth the time spent reading.  I really enjoyed all three books for their uniqueness, the cleverness of the plot and this final book is a most gratifying conclusion that leaves no open threads.

Having read Daniel's solo work "Straw House..." and this series, I really can't wait to see what the next book Daniel or the brother/sister team have in store for readers next.
Labels: 2012 paranormal YA