107. E. Aster Bunnymund and the Warrior Eggs at the Earth's Core! by William Joyce 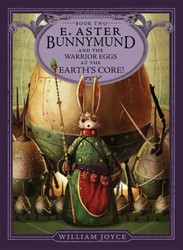 E. Aster Bunnymund and the Warrior Eggs at the Earth's Core! by William Joyce (US) - (Canada) - (Kindle)
The Guardians, Book 2


First sentence: "In the hinterlands of eastern Siberia was the village where Katherine, North, and Ombric called home."

Publisher's Summary: "Pitch, the Nightmare King, and his Fearlings had been soundly driven back by Nicholas St. North and company in the first Guardians’ adventure. But now Pitch has disappeared completely—and out of sight does NOT make for out of mind. It seems certain that he’s plotting a particularly nefarious revenge, and the Guardians suspect he might have gone underground. But how can they find him there?

Enter E. Aster Bunnymund, the only emissary of the fabled brotherhood of the Pookas—the league of philosophical warrior rabbits of imposing intellect and size. Highly skilled in martial arts (many of which he invented himself), Bunnymund is brilliant, logical, and a tunnel-digger extraordinaire. If the Guardians need paths near the Earth’s core, he’s their Pooka. He’s also armed with magnificent weapons of an oval-sort, and might just be able to help in the quest for the second piece of the Moonclipper."


Acquired: Received a review copy from Simon and Schuster Canada.

Another wonderful entry in this fabulous series which harkens back to the fantasy of L. Frank Baum, both in its whimsical early 19th century brand of fantasy and in its style of writing which includes chapter titles such as "Wherein the Friends Must Separate" and " In Which There Is a Fearful Discovery and a Whisper of Hope".  The story continues on from Book One which ended happily but left a quest unfulfilled.  All our old friends are back again as they search for the second artifact and it is this journey which leads them to Bunnymund and his steampunk world of egg-shaped machines.  A delight to read, this book (and series) is especially aimed at that special age of 7-11.  As I've remarked before, not since the Spiderwick Chronicles have I been so taken with the whimsy of a fantastical setting and story.  This would also make a great read aloud, though there is a touch of darkness that may frighten younger or sensitive children.  The illustrations continue to be superb and it is the combination of the text and artwork that makes this series so appealing.
Labels: 2012 children's books fairy tales fantasy steampunk