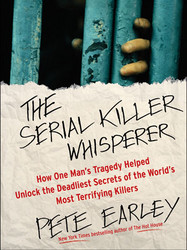 The Serial Killer Whisperer: How One Man's Tragedy Helped Unlock the Deadliest Secrets of the World's Most Terrifying Killers by Pete Earley (US) - (Canada) - (Kindle)


First sentence: "Tony Ciaglia felt the familiar butterfly-rush in his stomach as he keyed open his private postbox at the UPS Store on Rainbow Avenue in Las Vegas."

Publisher's Summary: "Fifteen-year-old Tony Ciaglia had everything a teenager wants—good grades, good athletic skills, and good friends—until he suffered a horrific head injury at summer camp. Pronounced clinically dead three times by helicopter paramedics before he reached a hospital, Ciaglia lapsed into a coma. When he emerged his right side was paralyzed and he had to relearn how to walk, talk, and even how to eat. His brain damage also required him to take countless pills to control his emotions.

Abandoned and shunned by his friends, he began writing to serial killers on a whim and discovered that the same traumatic brain injury that made him an outcast to his peers now enabled him to connect emotionally with notorious murderers. Soon many of America’s most dangerous psychopaths were revealing to him heinous details about their crimes—even those they’d never been convicted of. The killers opened up to him, trusted him, and called him a “best friend.”

But there was a price. As Tony found himself being drawn deeper and deeper into their violent worlds of murder, rape, and torture, he was pushed to the brink of despair and, at times, forced to question his own sanity—until he found a way to use his gift. Asked by investigators from the National Center for Missing and Exploited Children to aid in solving a murder, Tony began launching his own personal searches for forgotten victims, with clues often provided to him voluntarily by the killers themselves.

The Serial Killer Whisperer takes readers into the minds of murderers as never before—straight from a killer’s thoughts to paper. It is also an inspiring tale of an American family whose idyllic life is shattered by a terrible accident, and how healing and closure came to a tormented man in the most unlikely way—by connecting with monsters"

Reason for Reading: Various reasons really.  First of all I have an interest in serial killers.  Secondly, I was intrigued by Tony Ciaglia's brain injury and what led him to write to serial killers and finally I enjoy books that contains letters.

This book is not for the squeamish.  It contains brutal letters from serial killers describing their crimes in graphic detail.  Without having read the book, one will first wonder what purpose this serves.  Is it gratuitous and voyeuristic or does it serve some higher purpose?  It is completely possible to read the book and skip the letters that describe murders, not all the letters do.  What the letters do though, all of them, is let one inside the mind of a serial killer in a way that the public has never seen before.  When serial killers posture for interviews or psychologists they are performing for an audience and act and behave in certain ways that these narcissistic people need to do so.  But with Tony Ciaglia, he was/is able to get to the real person inside these monsters, most of them are still monsters on the inside, but Tony got their defenses down, treated them non-judgementally as people and they responded in kind, treating Tony as a "best friend".

The first part of the book deals with Tony's teenage accident which caused Traumatic Brain Injury (TBI) from which he was never expected to recover.  Recover he did though and we are taken through the journey of his recovery and the effect this had on his family and the after effects that defined the "new" Tony.  A more child-like person, but with sudden violent rages.  With much psychological work and the right medications, Tony is leading a relatively normal life today.  I found this part of the book fascinating.  Something in the "new" Tony starts his obsession with writing to serial killers, befriending them and getting them to talk openly about things that had never come out to officials before.  After Tony's accident he had a near death experience where he met God and became a very religious Catholic.  His family was Catholic but not exactly practicing.  He believed that God had sent him back for a purpose and this was his purpose, to help find information on cold cases and bring closure for families by using his gift with these men.  The end of the book contains a personal message from Tony where he speaks of his calling.

A riveting book to read.  The graphic letters are hard to read, but they and the other more mundane or waxing philosophical letters from the serial killers are quite insightful into the harrowing sickness of their minds.  I enjoyed reading the book, was mostly taken with Tony himself.  He has a child-like naivete about him, yet he didn't lose any of his intelligence in the accident, even though it is harder for him to express himself intellectually.  A very interesting book on two accounts.  For the insight into the psychological make-up of the mind of a serial killer and the psychological insight into the mind of a TBI victim and survivor.  Recommended for those interested in psychology and those with the stomach to read the graphic details.
Labels: 2012 biography non-fiction true crime