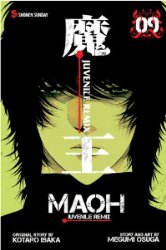 First sentence:  "Hop in."
Publisher's Summary: "To get revenge for his brother’s death, Junya decides to follow in Ando’s footsteps. To get to the bottom of who killed Ando, Junya will have to develop his own special powers. But before he can deal with Inukai, another group of misfits might beat him to it."

Vol. 9 is the second last book in this series and things are coming to a head.  This volume is very violent.  Junya's character has developed into a very hardcore type of guy, very different from his brother who was out to save the world.  Junya is mostly out to revenge his brother's death.  I'm not going to say much else but if you've read the series this far, you won't be disappointed with this volume.  Very intense and brutal, a creepy new character is introduced and I'm very eager to find out how it will all play out in the next, final volume, #10.
Labels: 2012 manga science fiction YA