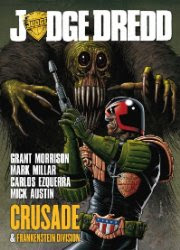 
First sentence: "You sent for me, Chief Judge?"

Publisher's Summary: "In Crusade, when a scientist returns from a 15-year deep space mission claiming to have a message from God, judges from all of the world's Mega-Cities race to Antarctica to try and claim the Almighty's secrets for themselves.

Among them is the toughest future lawman of them all - Judge Dredd - but in the scramble to secure the scientist and his information, the judges all brutally turn on the other as the prize proves too much to resist!

Meanwhile, a deadly agent from one of the world's superpowers stalks through the warzone, hoping that the confusion will ease his path to securing the secrets of the cosmos!

In The Frankenstein Division, the sinister judges of East Meg create the ultimate judge by stitching together pieces of their best - but when it goes on the rampage it heads for Mega-City One and the one man responsible for the death of its many 'donors' - Judge Dredd!"

Reason for Reading: I'm falling in love with Judge Dredd and his whole post-apocalyptic world.

I gave this book 5 stars but I'll let you know right away it certainly wasn't for its literary merit.  There was a lot of cheesy dialogue and readers of modern comics may not be able to get past that.  But I have to say I love to laugh at the cheese in my comics when it comes to superheroes and villains.  The Judges, including Dredd, are the heroes of these books but one doesn't necessarily side with them or like them.  They are "better" than the villains but then these judges are police, judge and jury rolled up into one person who makes a judgement call in matters of seconds with each case they take on.

This book is divided into 2 separate stories taken from the pages of "2000AD".  They are random stories both written by Morrison & Millar with a very weak connecting theme that they are both set in an Arctic cold location.  The first story in the book is "Crusade" first published in 1994 is set in the South Pole and has an "Alien" vibe to it as they know a monster is hidden in the secret lab where representative Judges (the best of the best) have been sent to get this former man back to their official respective Cities and learn his truth.  I really enjoyed this story.  It was much longer than the second one and covered 10 issues.  The plot built up rather speedily.  Though it did lag a bit in the middle,  The authors did manage to quickly pull it back up and gave us an action packed story.  I was a little irked that the bad guy had to be the Vatican City, complete with his "Inquisitor Judge", but what can you expect from anti-papist Brits anyway (I'm British so I'm allowed to say this kind of stuff :-)

The second story "Frankenstein Division" is much shorter and comes from 1995.  This one has the Soviets as bad guys in the sense that one of their inventions, a super judge made from remnants of judges that had been killed by Dredd during the Apocalyptic Wars, has escaped from Siberia with one thought on its mind: find and destroy Judge Dredd.  A great bit of battle action and behind the scenes dirty politics as we see how "justice" is handed out to those who let the super judge escape in the first place.

I'm loving these books and glimpses into the Judge Dredd universe where Judges are police, judge, jury and sentencer (though mostly executioner) all in one person!
Labels: 1994 2012 graphic novel post-apocalypse science fiction