72. The Best Book of Mummies by Philip Steele 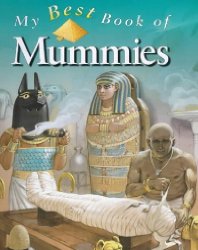 
First sentence: "Imagine opening up the secret tomb of someone who has been dead for thousand of years."

Publisher's Summary: "This work invites you to unwrap the bandages and take a thrilling first look at Egyptian mummies - who they were, how they were embalmed, where they were buried, and how they were discovered."

Acquired: My own copy, purchased new, from an online retailer years ago.

Reason for Reading:   We've had books from "The Best Book of" series in the house for over a decade.  It is a good series.  And since we are studying Ancient Egypt right now I pulled this book from the shelf.

This is a short, picture book style book, with large text and a multitude of pictures set up in the usual Kingfisher format of a main narrative text followed by smaller boxes of text under certain illustrations and each illustration is captioned.  This book is strictly illustrated except on the last page where two photographs have been used.  Set up in two page spreads the book topically uses three such spreads to work in a succinct ordered manner describing the mummy process.  First talking about the pharaohs and why they would want to be turned into mummies in the first place, the society and religion, followed by the mummification process, the funeral procession, where and how mummies were stored and with what and finally ending up with robbers, archaeologists and the modern scientific process.  A very interesting, well-written and entertaining book for up to about age 11.  When we finished reading my son said "Awww, more book?!"  It was too short for him.

He's really enjoying this study of ancient Egypt.  Up to this point in our reading mummies had of course been discussed with brief details but this is the first time the text got into all the little details and showed the tools, plus including interesting tidbits of information I don't think he'll forget soon.
Next we are off for a deeper look at Mummies with a DK book that is illustrated with photographs and thus will be more graphic.  I'm not sure if he will handle that well or not, he's very sensitive but this topic interests him, so we'll see.  If it goes over well, he'll actually get to see the mummies and learn that not just the Egyptians used the mummification process.
Labels: 1998 children's books history non-fiction