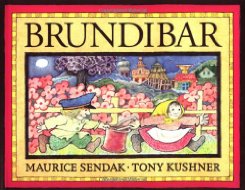 Brundibar: after the opera by Hans Krasa and Adolf Hoffmeister retold by Tony Kushner. Pictures by Maurice Sendak (US) - (Canada)

Publisher's Summary: "When Aninku and Pepicek discover one morning that their mother is sick, they rush to town for milk to make her better. Their attempt to earn money by singing is thwarted by a bullying, bellowing hurdy-gurdy grinder, Brundibar, who tyrannizes the town square and chases all other street musicians away. Befriended by three intelligent talking animals and three hundred helpful schoolkids, brother and sister sing for the money to buy the milk, defeat the bully, and triumphantly return home. Brundibar is based on a Czech opera for children that was performed fifty-five times by the children of Terezin, the Nazi concentration camp"

Reason for Reading: I pick up Maurice Sendak books simply because I love his illustrations, though I prefer the non-monster stuff.  When I got home and read the story behind this picture book I was greatly intrigued.

This book can be read on two levels.  One simply read the cute, fun story about children winning over a bully to young children.  There are a few frightening scenes and the story ends on an uncomfortable note but most children should get a shiver and a giggle from the story.

On the second level what we have here is a very deep, symbolic rendering of the Holocaust in picture book format.  Have older children read the jacket flaps, look up the story behind this opera and deal with the sad reality of where this story came from.  Then read the story and look carefully at the pictures because Sendak has used a lot of symbolism and hidden small images some of which may have only meaning to him.  I would love to read a critical essay on the illustrations of this book.  Some characters in the town have yellow Stars of David sewn to their chests, others have yellow arm bands, there are Stars of David in the occasional window and in the background we can occasionally see crosses on top of church steeples.  The authority figures have an arm raised as if in a "heil", they also often have a leg poised as if ready to march goose step.  The villain Brundibar has a Hitler mustache and his organ grinder monkey is wearing a German helmet.  The Dr. is distinctly portrayed as Jewish and the final scene shows the mother's bedroom with a crucifix on the wall where there clearly wasn't one in the opening scene.  Also if you look closely you'll find the names of the composers written on the wall within the pages and every here and there is a haunting shadowy image of a tattered child in the background.  I could go on ...

All this to say, this picture book left me feeling sad for the fate of those who wrote and preformed this opera and also for the message that while we can beat bullies when we come together, there will unfortunately always be another one around another corner.  Yet at the same time I was boosted by the spirit of the real people who lived (really *lived*) while they were dying in those horrifying concentration camps.  This book is a classic and should not be forgotten.  Thanks to Hyperion for keeping it in print.  While a picture book, it would make a great addition to middle/high school courses on WWII.
Labels: 2003 children's books fairy tales picture books WWII YA