Welcome to my mailbox! This is what found a new home with me last week!

The ineffable nature of grieving and belief inspires a tender, gritty, and breathtaking work of graphic storytelling from the creators of The Savage.

Do you believe in life after death? Slog does. He believes that the scruffy man on a bench outside the butcher shop is his dad, returned to visit him one last time. Slog’s friend Davie isn’t so sure. Can it be that some mysteries are never meant to be solved? And that belief, at times, is its own reward? The acclaimed creators of The Savage reunite for a feat of graphic storytelling that defies categorization. Eerie, poignant, and masterful, Slog’s Dad is a tale of astonishing power and complexity. 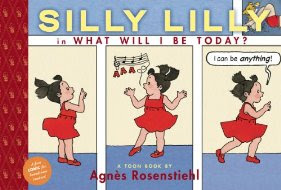 Lilly can be whatever she wants!

In her second TOON adventure, no job is too touch for Silly Lilly: first she's a cook who paints, then an acrobat who tumbles, then a city planner...

Agnès Rosenstiehl's spunky heroine, one of France's most beloved children book characters, takes on a new role every day of this week. Lilly's unstoppable antics are bound to spark young readers' imaginations.

After the conclusion of The Silver Anklet, Tara’s triumphant return to Morni is short-lived. Tara’s deceased former stepmother, Kali, seeks revenge through her daughter, Layla. And so begins a series of carefully orchestrated events to cast suspicion on Tara: a dead dog in the village temple, contaminated well water, and whispers that Tara is still possessed.

Layla fuels the villagers’ blind superstitions and fears. Soon all of Morni is against Tara, even her own family. Death seems to be the only way to stop her evil stepsister.

Tara turns to Lord Yama and his deadly conch for help. He takes her to the Underworld to seek advice, but when she returns, she has only 24 hours to prove her innocence and to save the village before she must go back to the World of the Dead. Forever.

Can Tara believe in herself once more to defeat Layla, or will Lord Yama and his deadly conch claim their next victim? The harrowing conclusion to the thrilling Tara Trilogy answers these questions and more.

In sixteenth-century Hungary, Countess Elizabeth Bathory began to torture and kill over 600 servant girls so as to bathe in their blood. She believed this practice would render her beauty immortal; it certainly did her reputation. Quiver tells the chilling story of the notorious Countess Bathory and her undying power to enthrall.

Danica, a young forensic psychologist, is one of many who have been drawn into the orbit of Bathory’s enduring legend. Danica has moved to England from Canada to work at Stowmoor, a former insane asylum turned forensic hospital, and one of her patients is Martin Foster, imprisoned for murdering a fourteen-year-old girl. Foster is a menacing but fascinating patient, and Danica begins to suspect he may have belonged to a cabal idolizing Bathory and reenacting her savage murders.

At the same time, Danica receives a mysterious note from Maria, a seductive archivist who moves in glamorous circles and with whom Danica has an intriguing and complicated past. Maria claims she has discovered Bathory’s long-lost diaries, which chronicle her spectacularly bloody crimes, and as Danica’s career and her relationship with her artist-boyfriend, Henry, begin to break down, Maria increasingly insinuates herself into her life. Soon, Danica is in too deep to notice that Maria’s motivations are far from selfless, and that, in fact, they may just cost Danica her life.

From the author, Monica Kulling:

Mr. Dash may not have a pedigree (he can count five different breeds of dogs as family), but from his furry head to his wagging tail, he is a gentleman. His fine manners make him a perfect companion to Madame Croissant. Their life together is graceful and civilized, what with walks in the park, stamp-collecting, and a passion for flowers.

But the well-ordered household is turned on its head whenever Madame Croissant’s granddaughter, Daphne, comes to visit. She’s as wild as Mr. Dash is courtly, and she makes the poor dog’s life miserable. But when she finds herself in real trouble, Mr. Dash proves that he is not only well-mannered but as brave as any knight.

Merci Mister Dash! is not only a hilarious salute to common courtesy, it will appeal to dog lovers and to anyone who is trying to civilize an untamed creature – of any kind.