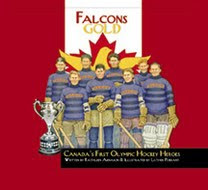 Acquired: Purchase a used copy at a book sale.

Reason for Reading: An unusual Canadian history topic. Thought my son/husband would enjoy for bedtime reading.

This tells the story of the Falcons hockey team from Winnipeg, Manitoba who became the first team to win a Gold medal for hockey at the Olympics Games in 1920. At the 2002 Olympics in Salt Lake City a mural was unveiled in honour of this first winning (Canadian) team and the artist who painted that mural is the artist who illustrated this book, Luther Pokrant. Wonderfully enough, my copy is signed by both the author and illustrator!

The story is set within a fantasy. Erik's grandfather has a hockey puck he caught at a game he once watched as a boy when the Falcons played and he now passes it on to his grandson. They go watch a game at the arena where the mural is displayed and Erik is sucked into the painting meeting the Falcons. Later on at another game, he brings the Falcons out of the painting to watch a modern hockey game. During all this we learn a lot about the early days (1920s) of hockey, how it was played, and about that first Olympic Games in Belgium in 1920 that first featured hockey as an event. We also learn about a Canadian man, named Charlie Thorson, who was a great friend of the team's and designed their uniforms. Charlie later went on to become silently famous as a cartoonist working for all the major animation studios with his biggest claims to fame being the man who created Disney's Snow White (many say after a former girlfriend of his) and Warner Bros. Bugs Bunny. A very interesting and fun story though the fantasy element may not appeal to all readers. The last pages include two non-fiction essays, easily read aloud, one telling the whole true story of the Falcons. The other shorter one, on the accomplishments of Charlie Thorson. A little treasure I'm glad to have found!
Labels: 2002 Canadian author children's books historical fantasy history non-fiction