A full and busy mailbox last week brought me plenty of review books:

Incorruptible, Vol. 3 by Mark Waid - Reformed supervillain Max Damage, and his sidekick Jailbait, travel to the ruins of Sky City. A vicious gang of Plutonian-worshipping white supremacists are wreaking havoc on the survivors and ruling with no mercy. But there's one thing they didn't count on...Max Damage. The key to victory may lie in the hands of Alana Patel, Plutonian's ex-girlfriend. But how will Max ally himself with Alana when she hasn't come close to forgetting about Max kidnapping and torturing her in his days as a villain? 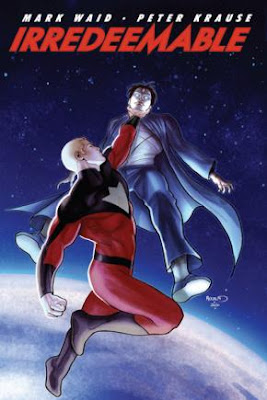 Irredeemable, Vol. 5 by Mark Waid. The secret history of Hornet, who died at the hands of Plutonian, is finally revealed. The fallen Paradigm member had a plan--a fail safe--that puts all of Earth and the Plutonian in danger. And when Modeus' plans reach critical mass, the few remaining heroes of Earth are the only thing standing between civilization and ultimate chaos.

Wildcat Fireflies by Amber Kizer. Meridian Sozu is a Fenestra—the half-human, half-angel link between the living and the dead. She has the dark responsibility of helping souls transition safely into the afterlife. If people die without the help of a Fenestra, their souls are left vulnerable to be stolen by the Aternocti, a dark band of forces who disrupt the balance of good and evil in the world and cause chaos.
Having recently lost her beloved Auntie—the woman who showed her what it meant to be a Fenestra—Meridian has hit the road with Tens, her love and sworn protector, in hopes of finding another Fenestra. Their search leads them to Indiana, where Juliet, a responsible and loving teenager, works tirelessly in the nursing home where she and several other foster kids are housed. Surrounded by death, Juliet struggles to make a loving home for the younger kids, and to protect them from the violent whims of their foster mother. But she is struggling against forces she can't understand . . . and even as she feels a pull toward the dying, their sickness seems to infect her, weighing her down. . . .
Will Meri and Tens find Juliet in time to save her from a life of misery and illness? And will Meri and Tens' own romance weather the storms of new discoveries?

Bink & Caution by Tim Wynne-Jones. Boy, did Blink get off on the wrong floor. All he wanted was to steal some breakfast for his empty belly, but instead he stumbled upon a fake kidnapping and a cell phone dropped by an "abducted" CEO, giving Blink a link to his perfect blonde daughter. Now Blink is on the run, but it’s OK as long as he’s smart enough to stay in the game and keep Captain Panic locked in his hold. Enter a girl named Caution. As in "Caution: Toxic." As in "Caution: Watch Your Step." She’s also on the run, from a skeezy drug-dealer boyfriend and from a nightmare in her past that won’t let her go. When she spies Blink at the train station, Caution can see he’s an easy mark. But there’s something about this naïve, skinny street punk, whom she only wanted to rob, that tugs at her heart, a heart she thought deserved not to feel. Charged with suspense and intrigue, this taut novel trails two deeply compelling characters as they forge a blackmail scheme that is foolhardy at best, disastrous at worst - along with a fated, tender partnership that will offer them each a rare chance for redemption.

The Hunt of the Unicorn by C.C. Humphreys. Elayne thinks the old family story that one of her ancestors stepped through a tapestry into a world of mythical beasts makes a great fireside tale. But she lives in the real world. In New York City. And she's outgrown that kind of fantasy.

Until she finds herself in front of a unicorn tapestry at the Cloisters museum and sees her initials woven into the fabric. And hears a unicorn calling to her. And slips and falls—into that other world.

Suddenly the line between fantasy and reality isn't so clear. But the danger is real enough. Almost before she can think, Elayne is attacked by a ferocious beast, rescued by a unicorn, and taken prisoner by a tyrant king. Each of them seems to have an idea about her—that she's a hero, a villain, dinner!

But Elayne has a few ideas of her own. She wants to overthrow the king; she wants to tame the unicorn. She wants to go home! And she's willing to become both hero and villain to do it.

Tegami Bachi Letter Bee, Vol. 4 - Amberground is locked in darkness. A man-made star casts only a dim light over the land. The pitch-black wilderness is infested with Gaichuu--colossal insects with metal exoskeletons. The Gaichuu make travel between the cities of Amberground extremely dangerous. But thankfully the Letter Bees, a brave corps of messengers, risk their lives in order to keep the hearts of Amberground connected.

A Letter Full of Lies Lag, now a Letter Bee rookie, meets Dr. Thunderland, Jr. a peculiar man who collects and catalogs the various Amberground species. When the doctor takes a particular interest in Steak, Lag and Niche have to hustle to keep him off the doctor’s dissection table! The ensuing chaos pays off for Lag when the doctor reveals that Gauche—Lag’s missing hero—paid the doctor a visit before he disappeared.

Nura: Rise of the Yokai Clan, Vol. 1 - While the day belongs to humans, the night belongs to yokai,supernatural creatures that thrive on human fear. Caught between these worlds is Rikuo Nura. He's three-quarters human, but his grandfather is none other than Nurarihyon, the supreme commander of the Nura clan, a powerful yokai consortium. So, Rikuo is an ordinary teenages three quarters of the time, until his yokai blood awakens. Then Rikuo transforms into the future leader of the Nura clan, leading a hundred demons.

Genkaku Picasso, Vol, 2 - Having cheated death, Hikaru Hamura must save himself by using his artistic abilities to help others.

The Whicharts by Noel Streatfeild - 1920s London: three adopted sisters train for the stage and support the household.

Maimie, Tania and Daisy Whichart have self-reliance thrust upon them. The Whicharts is the story of their dreams, friendships and loves. The drudgery of stage-work is set against their passion for family ties and realising their dreams.

Out of print since the 1930s, Noel Streatfeild's first novel is an exuberant portrayal of London cultural life in the inter-war years.

Purchased for myself from an online retailer: (got tired of adding pics & descriptions!)