15. Children of the Dust Bowl: The True Story of the School at Weedpatch Camp 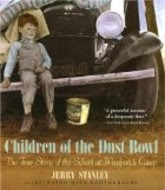 Children of the Dust Bowl: The True Story of the School at Weedpatch Camp by Jerry Stanley. Illustrated with Photographs (Canada) - (US)

Life had always been hard on the farmers who lived in Oklahoma, and in the 1930s it was especially hard on those who lived in the Panhandle, a barren stretch of rock and red soil sandwiched between Texas, Kansas, and New Mexico.

Acquired: Purchase a copy through an online retailer.

Reason for Reading: Read aloud to my son for our history curriculum.

This is the story of a group of people who called themselves "Okies", having come from the Oklahoma region, who migrated to California from the Dust Bowl area during the Depression of the 1930's. Through extensive photographs and quotes from those who were youngsters at the time we get an insider's look at the Dust Bowl and what it was like to live there at the time. We are taken along for the ride as jalopies laden down with a family's worldly goods headed west for migrant farm work in the San Joaquin Valley area of California. Then the book focuses on life there for the "Okies" They met terrible opposition from the people already living there and prejudice became rampant. The "Okies" lived a bedraggled life in tents, with rags for clothing and children who were not wanted in the schools. Children would taunt them and teachers would ignore them. The prejudice they faced was almost unbelievable that it resembled racism. One person is quoted as comparing them to "white folks". How are people from Oklahoma less white than those from California?!?! My son and I were amazed and shook our heads at how little it can take for prejudice and racism to rise from the smallest of differences between people.

Then comes along Leo Hart, a high school counselor who saw the need for these children to be educated and through sheer determination and wits he began to build a school for them. He easily raised money from the Californians when they learnt the money was to build a separate school for the "Okie" children and he scoured the universities looking for like-minded graduate teachers to come teach at his school. Together, Leo, the children, staff and parents built the school and as soon as possible classes started taking place. There were two rotations where half the school would work on academics in the am and work on building in the pm and then they'd switch at lunchtime. Little did they know that the Weedpatch School would become such a success. Leo was ahead of his times in wanting to create a diverse education for his students which not only included the academics but also included animal husbandry, carpentry, plumbing, agriculture (growing their own food for their cafeteria), kitchen skills, (the cafeteria meal was prepared by teachers and students together). One of the teachers who taught typing and stenography was also the chemistry teacher and she taught the girls how to make their own face cream and cosmetics! The school also had its own C-46 where they were taught aircraft mechanics and any students earning marks over 90% in math were allowed to drive the plane up and down the runway!

This book is suitable for middle grade to young teen readers and as a read aloud to younger students. The writing isn't exactly the most compelling narrative, but the story itself is so interesting that with the photographs and quotes from the surviving children make it a powerful read despite any dryness in the writing. A great book for getting a feel for the Dust Bowl, and the resulting migrant workers and their hardships. The story has ties to Steinbeck's Grapes of Wrath which are discussed in the text and the two would make a good read together for older students.
Labels: 1992 children's books history non-fiction YA