Reason for Reading: Book 2 is a Cybils '10 nominee and as a panelist for Graphic Novels this is required reading for me. So I decided to go back and read book 1 as well. 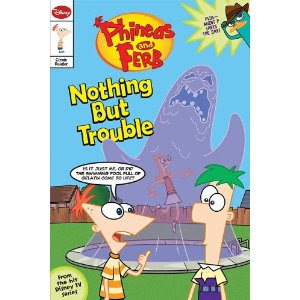 #1. Nothing But Trouble. 32 pgs. Jun 15, 2010 - First off these are basically comic books (same size, set-up, etc.) with paperboard covers to make it a "book" instead of a comic. Apparently Phineas and Ferb is a TV Cartoon (one I've never heard of, nor on a station we receive). Most other potential readers will be familiar with the show so I won't go into details. This book contains two short stories both of which involve the boys creating a fun invention, a swimming pool jello-mold trampoline & a water slide twisting around Big Ben, respectively) which Dr. Doofenshmirtz destroys because of some dastardly plan but at the end of the day secret agent Perry the platypus unbeknownst to anyone saves the day. Both were cute fun stories I'm sure fans of the characters will enjoy. In the first story I thought the jello trampoline monster was an original idea and in the second I enjoyed the James Bond humour especially of teaming Percy up with Agent Double O-O (isn't that triple O?). It's a funny scene. 3.5/5

#2. The Chronicles of Meap. 32 pgs. Jun 15, 2010 - Much better than the first volume. This time the book is devoted to one story. The boys are playing with their latest invention and accidentally cause a space ship to crash. Out comes the cutest little alien you ever saw who only says "meap!". Candace thinks it's one of the latest Japanese kawaii toys her brothers have teched out and takes it to a convention. Meanwhile Agent P (Perry Platypus) is investigating why Dr. Doffenshmirtz has carpeted his entire headquarters inside and out! Eventually the two stories merge and we have a fun, exciting plot. Lots of funny moments and a cute story. I've never seen this cartoon but from this example I think it's one I'd like. I love the scene where Candace receives her new toy in the mail, the latest Japanese sensation (similar to a Build-a-Bear only you cross different animals together) . Her friend crossed a bunny and a bear and it sooo kawaii (cute). Candace is very excited to see her already named Senor Frowg, a cross between a frog and a cow, and what comes out of the box can only be described as mutant; it's hilarious! 4/5
Labels: children's books cybils graphic novel humour