Last week brought a small selection of books for me from various sources. Another Cybils book trickled in, one book for review purposes and two I purchased online.

Set in the imaginative realm of the award-winning comic book series FABLES, the book takes place long ago, in the deepest dark of The Black Forest. Two brothers — Peter Piper and his older brother Max — encounter ominous forces that change them both irreparably. Thus begins an epic tale of sibling rivalry, magic, music and revenge that spans medieval times to the present day, when their deadly conflict surfaces in the placid calm of modern day Fabletown.

PETER & MAX: A FABLES NOVEL features the prose of award-winning comic book writer Bill Willingham and the lush ink drawings of FABLES artist Steve Leialoha. The novel also reveals secrets of some of the regular FABLES series cast members including Bigby Wolf, Frau Totenkinder and Bo Peep. Also included is an 8-page sequential story by Willingham and Leialoha that serves as a bridge to the FABLES titles.

From the publisher for Cybils consideration: 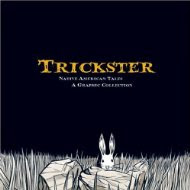 All cultures have tales of the trickster—a crafty creature or being who uses cunning to get food, steal precious possessions, or simply cause mischief. He disrupts the order of things, often humiliating others and sometimes himself. In Native American traditions, the trickster takes many forms, from coyote or rabbit to raccoon or raven. The first graphic anthology of Native American trickster tales, Trickster brings together Native American folklore and the world of comics.

In Trickster more than twenty Native American tales are cleverly adapted into comic form. Each story is written by a different Native American storyteller who worked closely with a selected illustrator, a combination that gives each tale a unique and powerful voice and look. Ranging from serious and dramatic to funny and sometimes downright fiendish, these tales bring tricksters back into popular culture in a very vivid form. From an ego-driven social misstep in “Coyote and the Pebbles” to the hijinks of “How Wildcat Caught a Turkey” and the hilarity of “Rabbit’s Choctaw Tail Tale,” Trickster provides entertainment for readers of all ages and backgrounds.

Purchased online: I had the manga on pre-order and added the other as I had to have free shipping!

Jim, Dehdeh, and Ruka’s mom finally track down Anglade’s yacht, but neither the rouge scientist nor Umi and Ruka are on board. All that remains is a cryptic invitation to Jim. While Jim tries to figure out the game his ex-colleague is playing and Kanako dives into memories of her daughter Ruka, the strange sea-changes continue around the world.

"Reading this book was one of the greatest graces of my life!"
St. Thérèse of Lisieux

In the late nineteenth century, Father Charles Arminjon, a priest from the mountains of southeastern France, assembled his flock in the town cathedral to preach a series of conferences to help them turn their thoughts away from this life’s mean material affairs—and toward the next life’s glorious spiritual reward. His wise and uncompromising words deepened in them the spirit of recollection that all Christians must have: the abiding conviction that heavenly aims, not temporal enthusiasms, must guide everything we think, say, and do.

When Father Arminjon’s conferences were later published in a book, many others were able to reap the same benefit—including fourteen-year-old Thérèse Martin, then on the cusp of entering the Carmelite convent in Lisieux. Reading it, she says, “plunged my soul into a happiness not of this earth.” Young Thérèse, filled with a sense of “what God reserves for those who love him, and seeing that the eternal rewards had no proportion to the light sacrifices of life,” copied out numerous passages and memorized them, “repeating unceasingly the words of love burning in my heart.”

Now the very book that so inspired the Little Flower is available for the first time in English.

Let the pages of The End of the Present World and the Mysteries of the Future Life fill you with the same burning words of love, with the same ardent desire to know God above all created things, that St. Thérèse gained from them. Let them also enrich your understanding of certain teachings of the Faith that can often seem so mysterious, even frightening:

# The signs that will precede the world’s end
# The coming of the Antichrist, and how to recognize him
# The Judgment and where it may send us: heaven, hell, and purgatory
# Biblical end-times prophecy: how to read it and not be deceived

Jesus commands us to be ever-watchful for his return, and ever-mindful that we have no lasting city on earth. The End of the Present World and the Mysteries of the Future Life is an invaluable aid to inculcating in your spirit that heavenly orientation, without which true human happiness cannot be found—in this world or the next.