276. The Arabian Nights by Wafa' Tarnowska 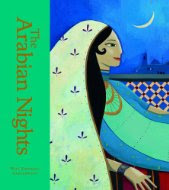 The Arabian Nights by Wafa' Tarnowska. Illustrated by Carole Henaff (Canada) - (US)

Long ago, when tales traveled along the Silk Road from China to Persia, crossing wind-blown sand dunes and busy oases, bleak mountain passes and fertile valleys, there lived two Persian kings of the Sassanid dynasty.

Reason for Reading: I love fairy tales and have read a few versions of The Arabian Nights along with many stories included in fairy tale collections and am always on the look out for new unique versions.

Wafa' Tarnowska, even though writing a children's book best suited for middle graders, used a 14th century Syrian manuscript (which has been translated into both Arabic and English for publication) as her basis for these stories. She has chosen here to showcase tales which feature women, princess, who bravely help their men in need. While a prince may rescue a princess, he receives ample help from her in pulling off the scheme. This makes Tarnowska's selections unique from other collections of the Arabian Nights. Also the tales are told within the famous plotline of Shahrazade telling the evil Shah a story every night to save him from killing her or anymore girls as he has been want to do over the years. Usually (from my past reading's of children's retellings) this story starts off with the evil Shah who kills a bride every morning and gets a new one every night, but this author has started the story much earlier here and explained how and why the Shah became this way in the first place, another unique feature in a children's retelling of the Arabian Nights.

The stories chosen, apart from Aladdin, are lesser known tales and probably will be new to most readers. The stories are told within a series of several connected tales, making for an exciting extended story involving the characters before tiny segues with the Shah and Shahrazade ending and beginning each new set of tales. They are wonderfully told, in rich language, never talking down to the young reader, the stories don't involve any violence but people are turned into animals and stone, etc. with magic. The sensual aspects are present but kept to an age appropriate level. Kings or princess are "with" the princess and then a year later there is a baby, the word "lover" is used, that sort of thing. I enjoyed the authentic flavour of these tales.

The art also adds to the authenticity of the book. Done in acrylic paintings, the style reflects the time period using two dimensional figures and a palette of desert colours including sand, turquoise and terracotta with browns and greens. The book itself is beautiful, being overly oversized (picture book format) with quality paper and a cloth covered spine. A lovely addition to any children's or fairy tale enthusiast's bookcase. This is a keeper.
Labels: children's books fairy tales