204. In Flanders Fields: The Story of the Poem by John McCrae by Linda Granfield 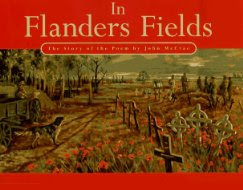 In Flanders Fields: The Story of the Poem by John McCrae by Linda Granfield. Illustrated by Janet Wilson (Canada) - (USA)

May 1915. In Flanders, the French and Belgian lands bordered by the North Sea, it was the time for fresh green shoots and white blossoms.

Acquired: Bought my own copy.

Reason for Reading: Read aloud to the 10yo as part of our history curriculum.

This is a book I've read several times. I've read the entire book to myself and aloud to each of my children plus I've read the poem from the book numerous times. This is not really a book about World War 1, or the Great War as it lets children know it was once called. Plenty of information about the war is imparted but that is through the telling of the story of Lt. Col. John McCrae, Canadian soldier and poet, how he came to write the poem "In Flanders Fields" and the impact that poem had on the people at the time as well as its lasting effect.

Textually, the book starts with a copy of the poem written in McCrae's own hand. Then there is a very brief set up for WWI, and a brief background on John McCrae before he was in Flanders. It then goes on to describe in detail the conditions of war at Flanders and McCrae is quoted from his own letters. We are given the story, well the two variations, of how and why John wrote the poem and the public's immediate overwhelming response to its heartfelt message. Then how the imagery of poppies became incorporated into war posters, advertisements for Victory Bonds and quotes from "In Flanders Fields" were used as taglines to inspire people. We get a good look at McCrae's war life as a surgeon and how he lived out his life, eventually dying on the front lines of pneumonia. But the message of the poppy didn't end with Lt. Col. John McCrae's death nor the end of WWI, it became a symbol of remembrance of those who have fallen in wars to fight for our freedom and the custom of wearing a poppy, which started during McCrae's life, is still followed today in many countries throughout the world as they honour a national day of Remembrance on November 11th.

Visually, the text pages are illustrated with a few drawings, photographs, postcards, and artifacts such as medals. But the true impact of this book comes from the beautiful yet haunting paintings of Janet Wilson which illustrate the poem a few lines at a time. In between the text pages every so often the poem is slowly told a few lines at a time using a two page spread entirely filled with the painting while the words are written along the bottom of the page. These paintings truly bring the poem's meaning forward to anyone who looks at them. Words and picture combine to tell the haunting, powerful cry of the poem. One cannot read the poem along with these paintings and not feel this poem in their gut, perhaps have their voice crack; it gets to me every time.

While I certainly love this book as a whole I would recommend it solely for the illustrated version of the poem alone.
Labels: Canadian author children's books non-fiction war WWII